END_OF_DOCUMENT_TOKEN_TO_BE_REPLACED

BUY GOLD prices in the wholesale 'spot' market held above $1240 per ounce in London trade Friday morning, heading for their highest weekly close since Donald Trump won the US presidency in November as world stock markets fell further from yesterday's new all-time highs.
Commodities fell again, but silver held firm alongside prices to buy gold, trading 10 cents shy of yesterday's pop to what one trading desk called "strong silver resistance" at $18.13 per ounce.
"There is an increased fear of European political risk, with sentiment towards French equities particularly low," said equity strategist Manish Kabra at Bank of America Merrill Lynch earlier this week, reporting a record reading on BAML's survey of fund managers' sentiment towards buying gold.
After conservative French presidential contender François Fillon was this week told a criminal investigation into illegal payments to his family will continue, opponent Marine Le Pen of the Front National was reported "confessing" to illegal payments to a bodyguard.
Finance ministers from Germany and Japan have "warned" new US Treasury secretary Steve Mnuchin to avoid cutting regulation too fast or accusing other countries of "currency manipulation" according to Bloomberg – both key planks of President Trump's electoral campaign.
Having refused to extradite 8 Turkish servicemen accused of plotting in last July's failed coup, Greece today sent a gunboat to the east Aegean after a Turkish navy vessel used live ammunition in what Ankara called a 'military exercise'.
Pakistan meantime said it killed 31 militants linked to ISIS on Friday after a series of bomb attacks culminated with yesterday's murder of 88 people at a Sufi shrine.
"Political risk is not reflected in markets," reckons Russ Koesterich, a fund manager helping run the $41 billion Global Allocation Fund at global wealth services giant Blackrock.
"People are not that nervous, and there are things that could go wrong.
"That adds to the argument" for buying gold as part of a wider portfolio, Koesterich says.
The largest single shareholder in gold-backed ETF the SPDR Gold Trust (NYSEArca:GLD), Blackrock Advisors cut its position by 22% in the fourth quarter of 2016, new data showed this week.
Blackrock Group Ltd, the 8th largest GLD holder, cuts its position 20% between October and New Year's Eve. 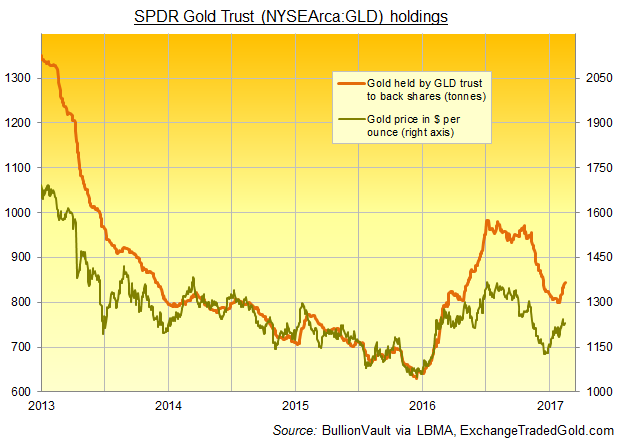 Japanese financial services group Mizuho was the largest GLD holder to sell its entire stake on the latest 13F filings by institutional investors to US regulators the SEC, liquidating almost $100m of the gold-tracking stock in the 3 months ending 31 December.
Canada-based wealth managers Gluskin Sheff also sold their entire GLD holdings for some $47m.
The stockmarket's post-Trump "honeymoon...may be over," wrote Gluskin Sheff strategist David Rosenberg last week, adding that with mixed US data helping "shave off more of the exuberance from the greenback...that should be positive for gold, basic materials and emerging markets."
Since New Year the GLD has expanded by some 3%, with an extra 7.4m shares needing an extra 21.4 tonnes of bullion to back their value, taking the trust's total assets to a 9-week high of 843 tonnes.