END_OF_DOCUMENT_TOKEN_TO_BE_REPLACED

SILVER BULLION jumped to new 4-month highs Wednesday in London, outpacing 2-week highs in gold as Western stock markets also gained ahead of the US Federal Reserve's latest policy announcement – widely expected to leave its key interest rate below 0.25% for the 84th month running.
Crude oil rebounded over 3% after new data showed US energy stockpiles growing less quickly than forecast last week.
With the US Dollar edging lower on the currency market before the central bank decision, wholesale gold bullion prices touched $1182 per ounce – 1.5% above last week's finish – going into the afternoon's benchmark LBMA price auction.
Silver meantime shot to $16.30 per ounce – some 3% higher from last week – to trade at the highest Dollar price since mid-June. 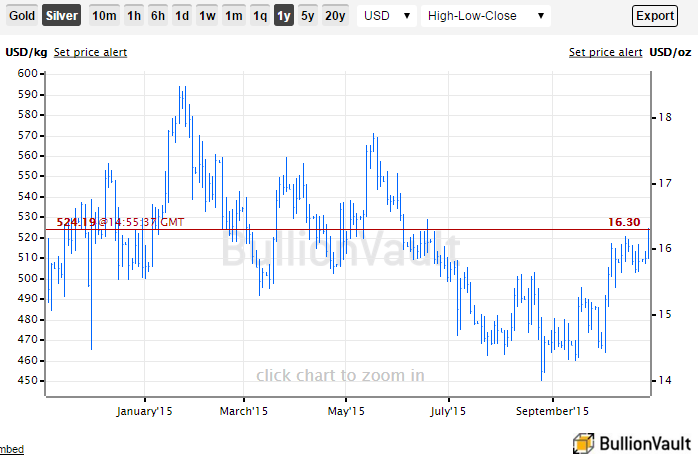 "We reiterate our longer-term bearish view," said a note earlier from Swiss private bank and asset manager Julius Baer, calling current price levels "another selling opportunity.
"Renewed US Dollar weakness is one of the key upside risks," Baer's analysts went on. "[But] medium to longer-term support should only materialise if the United States showed continued weakness that would prompt the Federal Reserve to loosen rather than tighten monetary policy."
Despite "strengthening economic activity...and inflation showing a clear upward trend," the Riksbank in Sweden today held its key lending rate at minus 0.35% and added another 65 billion Krona to its QE bond-buying program – now set to total SEK200bn ($23bn) by June next year.
The Krona however rose on the currency market Wednesday against both the Dollar and the Euro.
Looking at the 19-nation Eurozone, "If we see a risk that inflation would go back to 2%...in a much more sluggish way than previously expected," said European Central Bank board member Benoit Coeure last night, "that may also mean an adjustment of the deposit facility rate."
"The credibility of the policy," agreed ECB chief economist Peter Praet separately, "you cannot take it lightly.
"[We] have a duty to use the instruments" available, such as negative rates and QE, he said.
But "I don’t see any convincing reason to consider further policy action in December," countered ECB governing council member – and chief of Estonia's central bank – Ardo Hansson today.
"If something very fundamental changes, we could perhaps re-evaluate, but now I don't see any need to take such a step."
Back in precious metals, "[Gold] looks like it is stalling but may not be ready yet to weaken," said a note from global bank and bullion market maker HSBC this morning, noting five consecutive weeks of growing bullishness amongst speculators trading Comex derivatives.
"If gold cannot push convincingly higher soon, recent longs may become disenchanted and liquidate...[and] could knock gold back below $1150 quite rapidly."
Also calling $1150 a key level, gold prices are "consolidating at the 50% retracement of the move seen [so far] in 2015 at $1192," says a technical analysis from Germany's Commerzbank.
"Dips lower [are] viewed as corrective only...indicated to hold circa $1150/35 for another leg higher to then take hold."