END_OF_DOCUMENT_TOKEN_TO_BE_REPLACED

GOLD PRICES jumped to 8-week highs versus a rising Dollar on Wednesday as new data showed US wages remain sluggish while President Trump repeated his willingness to use nuclear weapons against North Korea after Pyongyang threatened to strike the United States' bomber base on Guam.
Gold prices had already recovered last week's losses for US, Euro and UK investors after Trump threatened "fire and fury like this world has never seen" overnight, but held flat for Swiss and Japanese investors as the Franc and Yen joined in what newspaper and wire editors agreed was a move to "safe haven" assets.
Oil rose back to end-July's 2-month highs against the Dollar, nearing $50 per barrel of US crude, as zinc prices rose further towards 9.5-year highs at the London Metal Exchange following the surge in Chinese steel prices.
Primarily used in diesel catalysts to clean engine emissions, platinum extended its outperformance of the other precious metals, rising to its highest price since mid-April at $980 per ounce.
That held platinum $295 per ounce below gold prices, extending the smallest discount since March 2017 for what was on average a premium above gold of $185 over the previous 25 years. 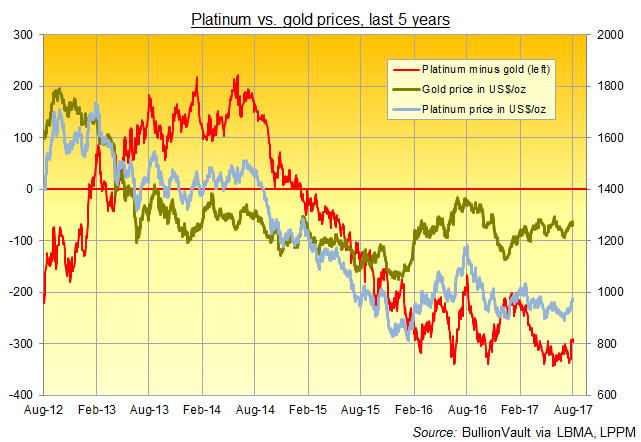 "It was a generally orderly ascent for bullion," says Swiss refining and finance group MKS Pamp's trading team of the gains immediately following North Korea's comments about Guam and Trump's first reply, "punctuated by a brief stop-loss run [for bearish traders closing their bets] through Tuesday's high print."
"I think this is going to continue to provide a little bit of support," Reuters quotes Australian bank ANZ's analyst Daniel Hynes, "but not enough to push prices significantly higher from here."
But "the [gold] market is certainly not positioned for some form of attack or, God forbid, war," says David Govett in his latest trading note for brokers Marex Spectron.
"Back in January 1991, in the run up to the first Gulf war, gold had steadily risen for months. The very day the [US-led coalition] attack was launched, the price fell $40 in a straight line.
That "very quick 10% move," says Govett, "prov[ed] the old adage of buy the rumour, sell the fact."
World stock markets meantime marked the 10th anniversary of interbank credit markets freezing as US subprime mortgage bond losses threatened major institutions by falling over 1% for a second day running after setting new all-time highs on the MSCI World Index on Monday.
New data today said China's consumer-price inflation missed analyst forecasts with its slowest July reading since the global economic slump of 2009 at 1.4% per year.
Japanese machine tool orders retreated from June's jump, new figures said, while Australian home-building and home-loan growth also missed consensus predictions.