END_OF_DOCUMENT_TOKEN_TO_BE_REPLACED

GOLD TRADING in London saw prices tick higher against all major currencies on Thursday, recovering the $1200 mark for US investors as world stock markets slipped amid fresh geopolitical tensions between the US and China, and Russia and Europe.
"China wants a different American president," US vice-president Mike Pence will say in a speech later today, one week after Donald Trump accused Beijing of "attempting to interfere in our upcoming 2018 [mid-term] election" at a meeting of the United Nations.
Meantime the UK accused Russia's GRU military intelligence unit of cyber-attacks today, including the 2016 hacking of US Democrat Party emails ahead of Hillary Clinton losing to Trump in the race for the White House – a claim also backed by Australia's government.
The GRU also targeted the international chemical weapons agency based in The Hague, the OPCW, as it investigated the novichok poisoning in Britain of a former Russian spy, the Dutch government said Thursday.
The ongoing US investigation into accusations of collusion with Russian agents by the 2016 Trump election campaign yesterday heard "explosive testimony" according to Republican politicians attending the closed-door hearings, saying that ex-FBI lawyer James Baker revealed "troubling...abnormal...[and] inherent bias" against the Republican Party.
Europe and the United States, said US ambassador to the EU Gordon Sondland meantime,  should "clean house" in their "long-term faithful marriage" so they can " deal with Chinese growth, Chinese theft of intellectual property, Chinese malign activity, Chinese militarisation in South China Sea, and all the other things we've been calling out to China to stop doing."
With all of mainland China's domestic currency, gold and financial markets still closed for this week's National Day holidays on Thursday, Hong Kong equities fell for a third day, hitting new 3-week lows amid widening concerns over the impact of Trump's heavy US trade tariffs on Chinese goods.
The so-called 'offshore' Yuan fell through what technical analysts called "support" at 6.9 per US Dollar, with analysts at both Bank of America Merrill Lynch and J.P.Morgan now forecasting further falls below 7 Yuan per Dollar. 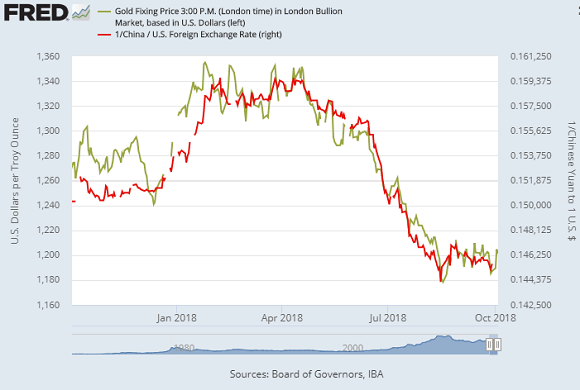 "[But] some see the uncertainty emanating from the trade war as temporary only, and remain positive over China's long-term outlook," says China economist Chris Leung at the Singapore government-backed DBS Bank, pointing to a rise in central-bank holdings of the Yuan.
With central banks outside China growing the Yuan to 1.8% of their total FX reserve assets by end-June this year – up from 1.2% at end-2017 – "They may actually be adding to their Yuan holdings because the currency has fallen so much," Leung says, "making it a cheap investment."
Gold trading meantime saw "a quiet session" in Asian on Thursday says a note from Swiss refining and finance group MKS Pamp,
"Gold contained in a narrow $4 range with China remaining on holiday.
"[But] since European traders have walked in there appears to be some demand."
Euro gold prices today touched new 7-week highs at €1048 per ounce, up 3.4% from last Thursday's 32-month low.
Italy's borrowing costs meantime eased back relative to German Bund yields, slipping back below 300 basis points after Prime Minister Giuseppe Conte vowed to start cutting Rome's budget deficit from 2020.
But "if the spread rises, we will not back down," said Conte's deputy Luigi Di Maio. "We are aiming for an Italy where the GDP grows."
Russia expects to export a record quantity of natural gas in 2018, because "Europe keeps increasing [its] Russian gas imports," according to Moscow's energy minister Aleksandr Novak.
Natural gas prices rose in European trading on Thursday, while Brent crude oil edged back from yesterday's new 4-year highs above $85 per barrel.