END_OF_DOCUMENT_TOKEN_TO_BE_REPLACED

GOLD PRICES rose and silver jumped against a falling US Dollar on Monday in London, trading near 5-week and 3-week highs respectively as global stock markets bounced amid negotiations between the US and China to avert a 'trade war' between the world's two largest economies, writes Steffen Grosshauser at BullionVault.
Gold overnight in Asian trade touched $1350 per ounce before falling back to Friday's close at $1347 only to reach $1352 in London trade.
Silver meantime jumped to $16.76 per ounce, pulling the  Gold/Silver ratio – which measures how many ounces of silver you could get for an ounce of gold – a little lower from a 2-year high of 81.
After Beijing retaliated against US President Donald Trump's raft of import tariffs last week, Treasury Secretary Steve Mnuchin said Sunday he's working with Beijing counterparts to cut the United States' huge trade deficit with China.
"We're having very productive conversations with them," Mnuchin told Fox yesterday.
The US Dollar remained under pressure, extending its fall to a 5-week low on the FX market as the 'safe-haven' Japanese Yen slipped back from a 16-month high.
Euro gold prices slipped Monday from their highest Friday close in 10 weeks, edging back to €1086 per ounce.
Asian equity markets were mixed, but most European shares advanced as crude oil dipped below $70 per barrel – a 3-year high when reached this January.
The New York stock market opened higher from its worst 1-week drop since September 2011 – the month when Dollar gold prices hit their all-time peak of $1920 per ounce.
Ahead of last week's jump in gold prices, hedge funds and other large speculative investors decreased their net-long position in Comex gold derivatives by 16%, according to the latest Commodity Futures Trading Commission (CFTC) data, cutting it to the smallest since end-December.
Managed Money speculators in Comex silver contracts meantime extended their net negative position, taking it to the largest bearish bet since current records started in 2006. 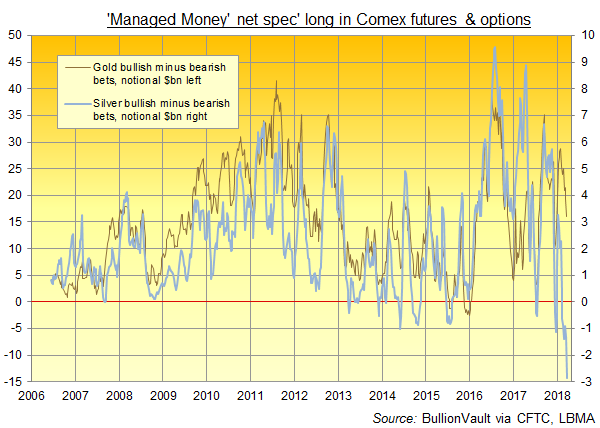 "On the surface, it looks like the ETF holders got it right," reckons Frances Hudson, a strategist at UK's Aberdeen Standard Investments, pointing to last week's rise in the share issuance by exchange-traded funds backed by gold.
The size of the world's largest gold-backed exchange-traded fund, the SPDR Gold Trust (NYSEArca:GLD), grew by 10 tonnes to reach a 5-month high of 850 tonnes.
"It could just be they're using gold as a hedge against things that hit the headlines and maybe the hedge funds haven't been focused so much on political news."
"Much of what gold will do this week will be headline-driven, with trade news being front and centre," said brokerage INTL FCStone's analyst Edward Meir.
"A mild early session bid tone to the bullion during Asian trade on Monday, and was soon extinguished by resting offers around $1350, as participants looked to take profits ahead of key resistance levels," noted precious metals trader Sam Laughlin at Swiss refining and finance group MKS Pamp.