END_OF_DOCUMENT_TOKEN_TO_BE_REPLACED

GOLD PRICES rose to new highs for this week against a falling Dollar on Thursday, touching $1511 per ounce as world stock markets slipped after the US Federal Reserve cut its key interest rate for the third time in 4 months but said it will now pause, as widely expected.
Major government bond yields fell hard as their prices rose, pushing 10-year US Treasury rates to their lowest in 3 weeks at 1.72% per annum.
The gold price in Euros meantime regained all of this week's prior 1.0% drop, trading back at €1357, as German, French and Dutch bond yields fell to become the most negative – costing investors money – since last Friday.
Yesterday's US economic data said Q3 GDP growth was stronger than analysts expected at 1.9% per year, while October's net jobs growth also beat Wall Street forecasts on the private-sector ADP estimate.
The bulk of betting on Fed Funds futures now sees no change from the new 1.75% ceiling until March at the earliest.
"Business fixed investment and exports remain weak," noted the world's most important central bank in the statement accompanying yesterday's Fed rate cut, "[but] household spending has been rising at a strong pace...job gains have been solid...and the unemployment rate has remained low."
This apparent resilience of US consumers "must be a subject for debate," counters Rhona O'Connell at brokerage INTL FC Stone in her Halloween precious metals report, telling clients that US personal incomes, spending and inflation on the PCE measure are now "one of the key elements to follow in the coming weeks and months.
"[Because] certainly, if gold jewelry purchases this year are anything to go by, US consumers are already cautious." 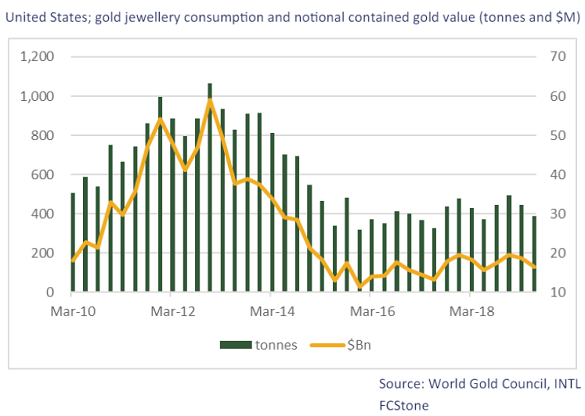 With Beijing today warning that a US trade deal doesn't look close as it pushes to expand Asia's free-trade pact at the Asean summit in Bangkok, China's official data agency said Thursday that the world's No.2 economy saw manufacturing activity shrink faster than analysts expected in October.
"Quiet pricing as gold holds onto the post-FOMC gains," said the Asian trading desk of Swiss refiners MKS Pamp overnight, pointing to a weak $5 per ounce premium for bullion landed in China – the No.1 gold consumer nation – over London quotes.
Finance ministry officials in No.2 gold consumer India today denied Wednesday's rumors and said that New Delhi is not considering an "amnesty" for people trying to dodge tax by holding undeclared jewelry or bullion.
Nearly 3.5 years after the UK's narrow referendum victory for Brexit meantime, the UK today saw the start of a General Election campaign instead of leaving the European Union on Halloween as scheduled and promised by Prime Minister Boris Johnson.
With the 12th December vote called to try and resolve Brexit, "Ideally, the main [UK] political parties would spell out the consequences [of leaving the EU]," says an opinion column in The Irish Times, "along with their plans to proceed and what these would mean.
"More likely, the campaign will lapse into shallow sloganeering about getting Brexit done, or a jobs-friendly Brexit, or whatever."
"Ain't that the truth," says long-time Brexit advocate Richard North on his blog. "Already we can see where the land lies [after] the rhetoric quickly turned to the NHS."
Vowing to hold a referendum and " get Brexit sorted within 6 months" today if his Labour Party wins, "What the elite are actually afraid of is paying their taxes," said opposition leader Jeremy Corbyn.
"So in this election, they’ll fight harder and dirtier than ever before...[because] we’re going after the tax dodgers, the dodgy landlords, the bad bosses, the big polluters."
The UK gold price in Pounds per ounce today rallied within £5 of last weekend's £1173 level as the FTSE 100 index of mostly international companies slipped another 1.0% to trade some 6% below New Year's 2018's all-time record high.