END_OF_DOCUMENT_TOKEN_TO_BE_REPLACED

GOLD PRICES ticked higher Thursday against most major currencies, showing a small gain for the week so far as world stock markets rose and the Euro neared 2-month highs against the Dollar amid the final policy press conference from European Central Bank chief Mario Draghi.
After the ECB last month cut its key deposit rate to -0.5% and announced the re-start of QE bond purchases, the Governing Council today made no change to policy, preparing to buy €20 billion of Eurozone debt every month from the start of November.
Edging a $3 gain for the week so far for US Dollar investors at $1493 per ounce, gold prices also rose 0.2% for Euro investors.
Defending his negative rates and QE policies, "The main risk is a downturn in the economy, whether it is global or in the Eurozone," said Draghi, widely credited with 'saving the Euro' but failing to spur economic reforms or fiscal union among Eurozone governments after the bloc's debt crisis of 2010-13.

Draghi: Governments with fiscal space should act in an effective and timely manner. In countries where public debt is high, governments need to pursue prudent policies and meet structural balance targets.

Draghi leaves the ECB with gold priced in Euros some €110 above the then-record highs of late 2011 where he found it, less than 5% below September's record highs at €1418 per ounce.
The EuroStoxx 600 index of major companies rose Thursday but again struggled to reach the record levels first set nearly 20 years ago, just after the single currency was launched. 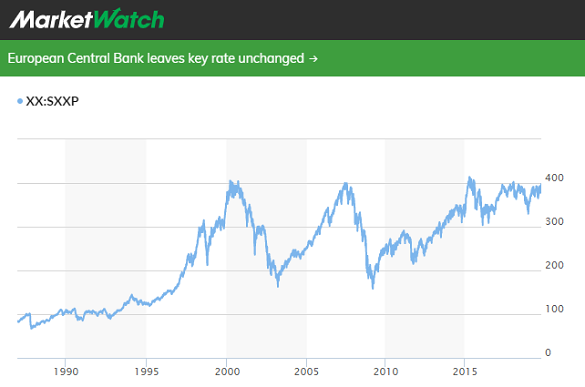 Unemployment meantime remains 75% greater across the 19-nation Eurozone than the G7 group of developed nations' average rate, slipping to 7.4% of the 330-million citizen union's labor force on the latest OECD statistics.
Government bond yields meantime ended September below zero for 11 of 19 member states (Austria, Belgium, Finland, France, Germany, Ireland, Latvia, Luxembourg, the Netherlands, Slovakia and Slovenia).
That dragged the currency union's average 10-year interest rates sharply below the pace of inflation – itself now failing to touch the ECB's upper target of 2.0% for more than a decade on the 'core' index of living costs. 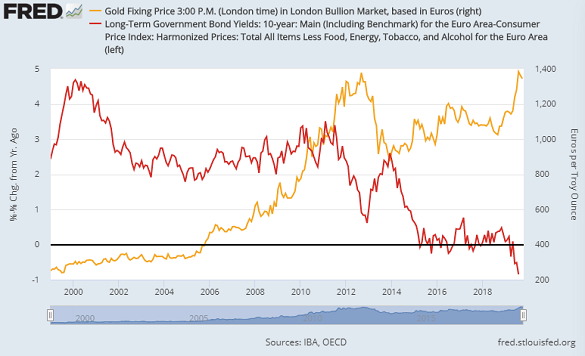 "The fallout from the [September] ECB meeting has been spectacular," says the Financial Times, noting how "the heads of the German, French, Dutch and Austrian central banks all publicly came out against parts of the package...decided against the advice of the central bank’s own officials and [then] attacked by a group of retired ECB grandees."
While "most of the dissenters have [since] tried to bury the hatchet by looking ahead to the big issues likely to occupy" his successor Christine Lagarde of the IMF,  the FT goes on, "economists say the public backlash weakens the ECB’s credibility and could make it harder for her to loosen monetary policy further in the future."
Eurozone neighbors Sweden and Norway both left their key policy rates unchanged earlier on Thursday, but the Riksbank in Stockholm –  the first central bank to go negative, back in 2009 – signaled that it plans to raise Swedish borrowing costs at its next meeting.
"The interest rate will most probably be raised in December to zero percent," the Riksbank said in its policy statement. "[But] uncertainty over the development of economic activity and inflation...is considerable. [Our] forecast indicates that the interest rate will [then] be unchanged for a prolonged period."
"In my view it is incomprehensible," Reuters quotes Danske Bank analyst Michael Grahn. "The entire economic picture is weaker than the Riksbank has been expecting...inflation is quite a bit below target [and] expectations are coming down.
"Other central banks are moving in the opposite direction."
Here in London meantime, the minority Conservative Government began what many pundits took as a pre-election campaign, targeting Facebook users with adverts claiming that Prime Minister Johnson's proposed deal with the European Union for leaving the EU on Halloween was "passed by Parliament" only to be "delayed" by the opposition Labour Party.
Brussels says it will give its decision tomorrow on Johnson's request for a Brexit delay until January.
US President Trump meantime announced the United States is quitting the Paris Agreement on reducing CO2 emissions to combat climate change, while supporters from the Republican Party in Congress stormed into a closed-session hearing of the Democrat-led impeachment enquiry into Trump's apparent attempt to ask a foreign power to investigate potential 2020 presidential contender Joe Biden.
Gold priced in Sterling today rose £10 from last Friday's level – the lowest weekly close in 12 – to reach £1158 per ounce, still some 10% below start-September's new all-time high.