END_OF_DOCUMENT_TOKEN_TO_BE_REPLACED

GOLD PRICES traded unchanged for the week so far in London on Wednesday, holding firm as the US Dollar retreated and world stock markets rose amid rumors that China will offer some kind of trade deal to White House negotiators at talks starting tomorrow in Washington.
Gold priced in the Dollar held tight around last week's closing level of $1505 per ounce, while European stock markets also reached Friday's level by adding 0.6% for the day.
Japan's stock market earlier closed 0.6% lower after new data said orders for machine-tools sank 35.5% last month from September 2018, "confirming a bleak picture for the country's manufacturing sector" according to the Wall Street Journal.
"Given the potential for further deterioration in data, Fed [interest-rate] easing, and lingering trade uncertainty," says Swiss bullion bank UBS' strategist Joni Teves, " we continue to see upside from current levels [in gold prices]."
"A buoyant greenback 'should' mean soft gold prices," says the latest weekly note from independent analysts Metals Focus, noting how bullion has risen sharply in 2019 even as the US currency has gained on the FX market.
The Dollar has now gained 13.9% since hitting 2.5-year lows in early 2018. Gold has meantime risen 12.9% against the US currency.
"This is unusual," says Metals Focus, "[and] some institutions believe that, when you see this anomaly of the two becoming synchronised, a strong rally in gold is imminent."
Based on the Broad Trade-Weighted Index tracked by the Federal Reserve, gold has already risen by more than one-quarter for non-Dollar investors since New Year 2018.
Rebased to 1999 on that TWI, the equivalent price of gold for non-Dollar investors currently trades $200 per ounce higher than the USD price. 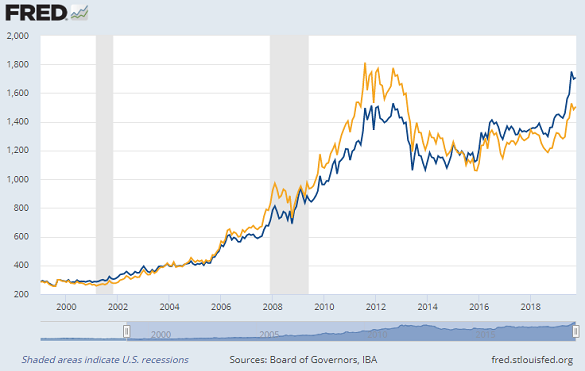 "China Open to Partial Trade Deal If Trump Removes Tariff Threats," claimed a headline on Bloomberg this morning, quoting un-named sources and also noting that tensions have worsened since Washington blacklisted 28 Chinese entities from buying US technology equipment, apparently for aiding human rights abuses against ethnic Uighur Muslims in Xinjiang Province.
"There is no such thing as these so-called 'human rights issues'," replied the foreign ministry in Beijing. "These accusations are nothing more than an excuse for the United States to deliberately interfere in China's internal affairs."
Gold priced in Sterling meantime held just below Tuesday's 4-week high of £1236 per ounce as the Pound erased a near 1-cent spike on the currency markets amid fresh rumors and counter-rumors over hopes that a Brexit deal can be agreed at next week's summit of EU leaders, in time for current 31 October deadline for Britain to leave the European Union.
"Although actions by [UK] businesses and authorities have resulted in some improvement in the preparedness for a no-deal Brexit," said the Bank of England today, "material risks of economic disruption remain.
"Financial stability is not the same as market stability. Significant further asset price volatility is to be expected in a disorderly Brexit."
Gold priced in the Euro today held flat for the week so far, trading at €1373 per ounce – a new record high when first reached in mid-August.
"For the global economy," said Kristalina Georgieva, new head of cross-border monetary authority the IMF, on Tuesday, "the cumulative effect of trade conflicts could mean a loss of about 0.8% of GDP."
After an "underwhelming" return from the Golden Week holidays for the wholesale bullion market in China – the metal's No.1 miner and consumer nation – "Trade headlines leading into discussions between the US and China this Thursday and Friday will no doubt be watched closely and dictate near-term pricing," says the Asian trading desk at Swiss refiners MKS Pamp, "with initial support sitting around $1480."
Teves at UBS currently sees gold prices reaching $1600 by the end of this year – some $150 above the 2019 peak she forecast this January – before rising again in 2020 and then averaging $1650 across 2021, just shy of the current annual peak set in 2012.
Platinum on Wednesday held flat with gold prices, down near the cheapest since end-August, while silver prices held yesterday's gain to trade near 2-week highs above $17.80 per ounce.