END_OF_DOCUMENT_TOKEN_TO_BE_REPLACED

“Maybe the trade war is affecting China more than realised and therefore the need to ease on policy, which dampened demand for gold there,” a Singapore-based trader said.

China’s central bank on Sunday announced a steep cut in the level of cash that banks must hold as reserves, the fourth such cut this year.

The People’s Bank of China said this new 1 percentage point reserve ratio cut was “reasonable and moderate, and will not lead to depreciation pressure” on the currency.

China’s onshore Renminbi weakened by 0.8% however versus the Dollar, marking its biggest daily decline since mid-July.

Gold bullion traded in Shanghai opened the day 1.1% higher against the Yuan than Chinese traders last saw it before the National Day vacation.

Prices then slipped back, and cut the premium over global quotes to $7 per ounce, as stock markets across Asia sank as the CSI 300 Index, which tracks 300 of the largest stocks on both Shanghai and Shenzhen exchanges, dropped by 4.3%, the biggest single-day percentage plunge in 31 months.

Betting against gold prices by Western hedge funds and other 'Managed Money' traders last week held near last month's new record high on Comex futures and options, according to US regulator’s the CFTC's data series.

Net of that group's bullish bets, the overall short position fell just 5.4% to the equivalent of 227 tonnes, remaining net negative for the 12th week running, the longest period since this data series started in June 2006. 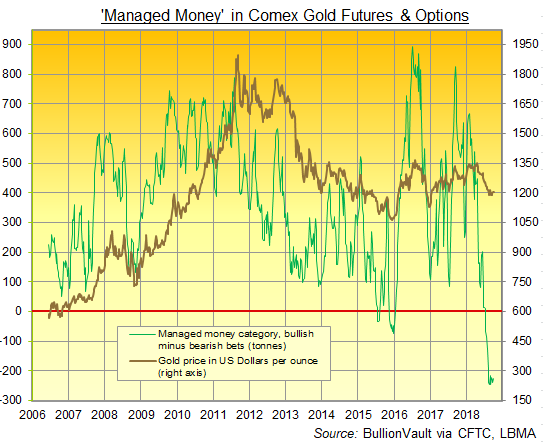 Holdings in the SPDR Gold Trust (NYSEArca:GLD), the world’s largest gold-backed exchange-traded fund, fell another 0.2% on Friday to need 730 tonnes of backing.

Italy’s government bond prices meantime fell again on Monday, driving 10-year yields up to a 4-year high of 3.63%, after the government refused to bow to criticism over its budget deficit plans by the European Commission.

The spread between German and Italian 10-year yields was pushed back above the 300 mark, the widest since 2013.

Columbus Day in the US means no Treasuries traded on Monday, but investors are now set to face $230 billion of new supply with Treasury auctions scheduled this week.

Shinzo Abe, Japan’s prime minister, meantime said Britain would be welcomed into the Trans-Pacific Partnership (TPP) trade deal with ‘open arms’ after it leaves the EU.

Sterling declined this morning against the US Dollar after news that UK business are still anxious about Brexit. Firms in the service sector, which represents 76% of UK GDP, have given up hiring staff, according to the British Chambers of Commerce.

Gold prices for UK investors fell below £910 per ounce on Monday afternoon.

A meeting of top US and Chinese diplomats got off to a frosty start on Monday, with US Secretary of State Mike Pompeo and Chinese Foreign Minister and State Councilor Wang took each other to task amid worsening bilateral relations.

“Recently, as the US side has been constantly escalating trade friction toward China, it has also adopted a series of actions on the Taiwan issue that harm China’s rights and interests, and has made groundless criticism of China’s domestic and foreign policies,” Wang said at a joint appearance with Pompeo.

Pompeo, who was briefing Wang following his visit with North Korean leader Kim Jong Un, said: "The issues that you characterised we have a fundamental disagreement."

With Japan's markets closed for a holiday today, tech and I.T. shares across Asia traded at the lowest level since July 2017 after Friday's accusation, reported by Bloomberg, that China infiltrated American companies with a hardware hack three years ago.