END_OF_DOCUMENT_TOKEN_TO_BE_REPLACED

GOLD PRICES again held tight around $1200 per ounce in London trade Tuesday as the US Dollar retreated on the currency market and global interest rates eased back on a rise in government debt prices.
Commodity prices edged higher but held near 2018 lows on Bloomberg's index after the United States imposed a new 10% trade tariff on a further $200 billion of Chinese imports.
Asian and European stock markets meantime shrugged off yesterday's drop on Wall Street, taking Japan's Topix to a 7-week high.
Germany's Dax rallied further from last week's 5-month low, and China's Shanghai Composite bounced from its new 4-year low hit on Monday.
Moscow meantime blamed Israel for the shooting-down of a Russian military plane near war-torn Syria.
Serbia will never recognise Kosovo, Belgrade's foreign minister said, as plans for a "land swap" to align ethnic populations between the two Balkan states came into doubt.
Gold prices have been "battered by a relatively strong Dollar," says the latest analysis from Japanese conglomerate Mitsubishi's strategist Jonathan Butler.
"[But] with the market becoming one-sided towards risk assets in the current economic climate, there is a danger that the current US political risks will be overlooked," he warns, saying this "could ultimately damage the Dollar and help precious metals.
"With inflation running at the target of 2% and the Fed running out of runway to raise rates, there is also potentially some support for precious metals as an inflation hedge."
Since the Lehman's crisis of 10 years ago this week, real US Fed interest rates, adjusted for inflation, have moved in the opposite direction to gold prices in more than 70% of all months. 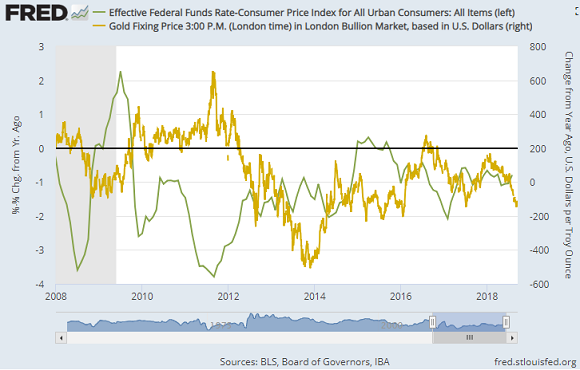 Also looking at the impact of US interest rates on gold, "Additional hikes based upon higher inflation – and so raising only nominal rather than real rates – would not necessarily be a negative development for precious metals," says a research note from Chinese-owned bullion market maker ICBC Standard Bank.
What counts in this month's Federal Reserve meeting, the analysis says, will be any comment around the so-called "natural rate of interest".
Also known as r* and defined by economists as "the real short-term interest rate expected to prevail when an economy is at full strength and inflation is stable," this number has since August been estimated by the New York Fed on its website, using the Holston-Laubach-Williams model.
"What stands out from a market perspective," ICBC Standard warns, "is that no real expectation for a higher r* is currently priced and that it would be a significantly bearish development for gold prices."
Meantime in No.2 gold consumer nation India – where the current wedding and early festival season is finding weak demand as the Rupee trades at all-time record lows on the currency market – rumors that the government will act to "curb" imports of non-essential commodities has "sent ripples through the gold industry" says the Business Standard, with dealers fearing a repeat of the anti-gold measures taken to cut the country's huge trade deficit in 2013.
"There is not much scope for hike in import duty on gold," ZeeNews quotes government sources, favoring "some kind of policy measures" to deter imports because "higher import duty on gold may [only] increase smuggling activities."
Illegal flows of gold into India continue to make headlines, with officials finding over $375,000-worth of bullion hidden on a flight into New Delhi on Tuesday.