END_OF_DOCUMENT_TOKEN_TO_BE_REPLACED

GOLD PRICES edged back towards yesterday's 3-month lows for Dollar investors on Tuesday, trading down to $1253 per ounce as silver again dropped through $20 per ounce.
Asian and European stock markets were flat after Wall Street failed to record a new high on Monday.
The Euro currency dropped to a new 14-month low of $1.2860 as Eurozone government bond prices slipped, nudging interest rates higher from new all-time lows.
The British Pound meantime erased most of a 1-cent rally from Monday's sudden 2014 lows, as a new poll put the "Yes" and "No" camps neck-and-neck in next week's Scottish independence vote.
Gold priced in Sterling also eased back however, dropping to £778 per ounce – a level first reached on the way up just before the May 2010 elections which ousted Gordon Brown, who famously sold half the UK's national gold reserves at rock-bottom prices a decade before. 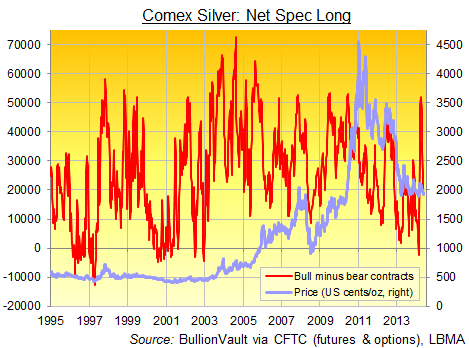 Backed by current Conservative PM David Cameron – who today cancelled Wednesday's weekly Prime Minister's Questions in Parliament to "talk and listen to the people of Scotland" with coalition partner Nick Clegg and opposition Labour leader Ed Miliband – Brown is now leading the "Better Together" campaign, promising "fast track" tax and spending powers for Scotland if it stays in the Union.
Should Scotland secede, Bank of England governor Mark Carney repeated in a speech to the TUC's annual congress of union leaders today, "A currency union is incompatible with sovereignty."
"The inability of gold to rally and stay elevated following [Friday's] dismal [US jobs data] speaks volumes about investors' attitude at present," says a note from traders at Swiss refining group MKS.
"Some physical buying could support bullion closer to the June lows at $1240," says Russian bank VTB's London office.
"Seasonal autumn buying plays its part...but the market is still likely to struggle through the year end," VTB adds, pegging "key long-term support" at 2013's three-year Dollar low of $1195.
Canadian-based bullion bank Scotia Mocatta also "maintain[s] expectations for further weakness toward the June low of $1240," says its New York strategist Russell Browne.
Even with gold prices falling, however, the metal continues to outperform silver says Browne. So while the gold/silver ratio – which rose above 66 on Tuesday morning – "remains relatively muted within the modest uptrend since late August, we...continue to expect a rally toward the May high near 68.00."
Silver traders "may be short already," adds Standard Bank's trading desk today, "and we could see short covering. But we with real [interest] rates rising, we still think this metal is most at risk to a move lower...[and] still target $15-17 range."
Large speculative traders last week raised their bearish bets against silver prices to the highest level since early June's 20-year records, adding 7 short contracts for every 4 new long bets, says a note from Japanese trading house and London market maker Mitsui.
Amongst money managers trading gold futures, meantime, the gross long position is "still at bottom of its range" since the financial crisis began in 2007, notes the commodities team at French bank and London bullion market maker Societe Generale, "with short position at record levels."