END_OF_DOCUMENT_TOKEN_TO_BE_REPLACED

GOLD PRICES rose against all major currencies on Tuesday, breaking above $1330 per ounce in US Dollar terms as US-China trade talks continued and tensions rose between nuclear powers India and Pakistan over continuing bloodshed in the border region of Kashmir.
After 40 of India's paramilitary police were killed at the weekend by terror group Jaish-e-Mohammed – said to have "strong support" from Pakistani intelligence services – another five Indian servicemen were killed overnight, along with four alleged terrorists.
Meantime in the United States, "Without enforcement, this deal fails," said Myron Brilliant of the US Chamber of Commerce overnight about the ongoing trade talks between Beijing and Washington.
"You need to have follow-through" to force China to buy more US goods and respect US intellectual property, he went on, "to ensure trust that this deal is sustaining and verifiable."
"There is no way the US can crush Huawei," says Ren Zhengfei, founder of Chinese tech giant – now banned from new national infrastructure contracts by the US, Australia and New Zealand –calling the arrest of his daughter Meng Wanzhou on a US warrant "politically motivated".
Priced in the Chinese Yuan gold rose above Y290 per gram in Shanghai today, its highest since September 2016.
Gold also hit 13-month highs in Japanese Yen, rising above Y4730 per gram – a level touched in only 11 months previously. 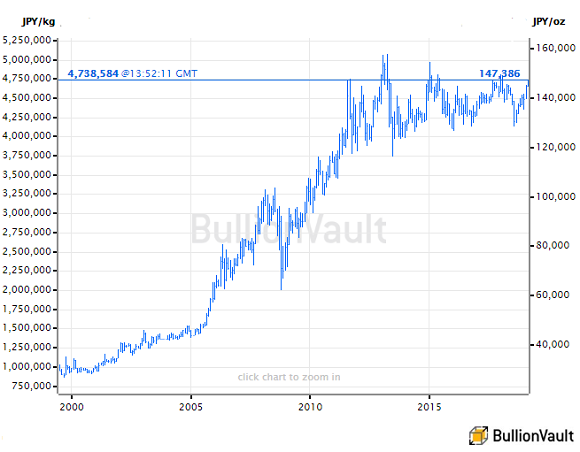 Also in the United States, long-time socialist Democrat Bernie Sanders overnight declared his candidacy for what Fox News calls the "crowded" 2020 presidential nominations.
The UK's opposition Labour Party meantime accepted former Liverpool council deputy leader Derek Hatton as a member, 34 years after he was expelled for belonging to Trotskyite group Militant and also disqualified from public office by a British court.
He was expelled from the Labour Party in 1986 for belonging to Militant, a Trotskyist group within the Labour party, which had earlier been found to be in breach of the Labour's constitution.
Going into talk radio and Christmas panto after his political career ended in what Labour's then-leader Neil Kinnock called "grotesque chaos", Hatton today rebuked the 7 former Labour MPs who quit the party yesterday to form an 'independent group' in protest at current leader Jeremy Corbyn's handling of Brexit, anti-Semitism and 'entryism' by the far-left Momentum group.
"Obviously there were times when it was very tempting to go a different way," Hatton told The Mirror tabloid paper, citing the so-called New Labour Government of Tony Blair's involvement in the Iraq War – "but I believed then as I believe now, the Labour Party is the political arm of the trade union movement."
New UK data today said more people than ever before were in work in January, with average earnings rising 3.4% from a year before.
The UK gold price meantime came within £2.50 today of the New Year's spike to 16-month highs at £1032 per ounce.
Gold priced in the single Euro currency meantime extended its strong 5-month uptrend to come within 40 cents of E1180, a level not seen since April 2017.
European stock markets slipped, cutting 0.5% off the Euro Stoxx 600, as new data said Italy's industrial output shrank 7.3% year-on-year in December.
With gold rising to 10-month highs in Dollar terms, silver prices in contrast struggled to move above last week's close of $15.80 per ounce.
Its weakest Friday finish in three, that was in line with levels seen at New Year, then a 6-month high. 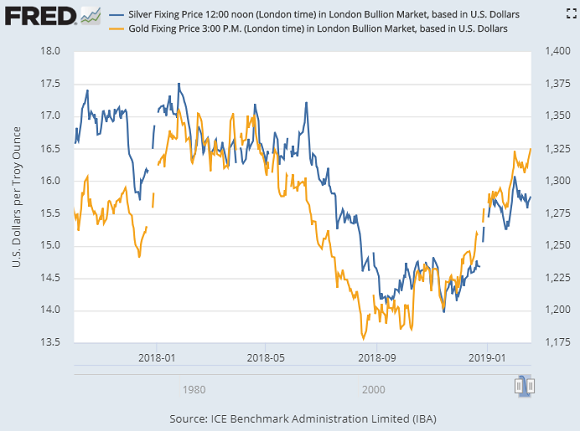 "Pakistan will take action on priority if there's actionable intelligence" on the Pulwama attack, said the country's Prime Mininster Imran Khan today.
But also accusing Indian leader Narendra Modi of stoking tensions to boost his vote in upcoming elections, Khan warned that if India strikes at cross-border sites, "Pakistan will not think of retaliating, it will retaliate."
Karachi's KSE100 and Mumbai's BSE Sensex both slipped around 0.5% for the day, edging back to 1-month and new 2018 lows respectively.
The Pakistani Rupee lost 25% of its US Dollar value in 2018, hitting new all-time lows after the State Bank agreed to let it depreciate and trade more freely.