END_OF_DOCUMENT_TOKEN_TO_BE_REPLACED

GOLD PRICES fell below last week's multi-month closing high against all major currencies on Tuesday, losing $15 for the day in Dollar terms as the US currency rallied and European stock markets finally caught up with the New Year rise in American and Asian equities.
"Talks with China are going very well!" tweeted US President Donald Trump as negotiators met again in Beijing to resolve the 'trade war' tariffs imposed on each other's exports in late 2018.
Trump's national security advisor John Bolton was however refused a meeting with Turkey's President Recep Tayyip Erdoğan, who instead lambasted US comments about Washington's current alliance against the ISIS death cult in Syria with Kurdish fighters – deemed to be terrorist forces by Ankara.
As world stock markets tumbled in December, gold-backed exchange-traded trust fund products saw their fastest growth in 22 months, new data said today from the mining industry's World Gold Council, itself sponsor of giant gold ETF the SPDR Gold Trust (NYSEArca: GLD).
The GLD expanded the most in 15 months as the MSCI World Index sank 7.7% and gold prices rose 5.2%, their fastest pace since the UK's shock 2016 Brexit referendum result.
But with gold prices then setting their highest London benchmark since mid-June at $1292.20 per ounce on Monday, the GLD yesterday saw an outflow of investor cash, trimming the total quantity of gold needed to back its shares now in issue 0.2% from last week's new 6-month high of 798 tonnes.
"[Gold prices] had such a strong year-end, it is not surprising to see some profit taking," says German bank Commerzbank's analyst Carsten Fritsch.
"[Gold prices] lower in European hours following strength in the US Dollar and higher real US Treasury yields," says World Gold Council chief strategist John Reade.
On a 5-week basis, the real rate of interest offered by 10-year US Treasury bonds – after accounting for market-based inflation forecasts – has moved in the opposite direction to gold prices two-thirds of the time over the last 15 years. 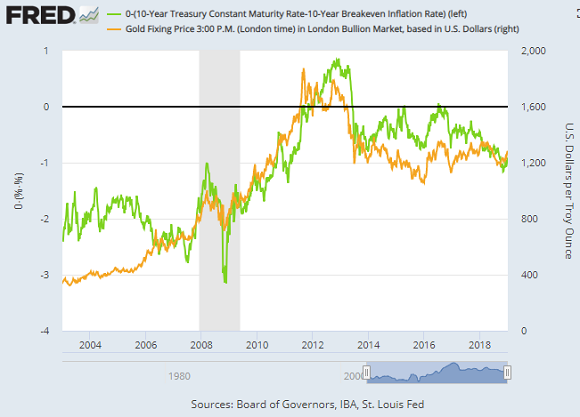 Nominal 10-year yields, before accounting for inflation, last week fell to 51-week lows of 2.56%, but that rate rose back to 2.70% on Tuesday as world stock markets extended their recovery from December's slump.
Speculators have over the last month slashed their view that the Fed will raise overnight US rates once or more in 2019 from 48.4% of all bets to 13.1% according to data from the CME derivatives exchange.
Looking at the US-China trade talks, "Any kind of agreement should be bullish for gold," adds Fritsch at Commerzbank, "because of a stronger Chinese Renminbi."
Also known as the Yuan, China's currency slipped back to Monday's opening level against the USA Dollar overnight in Asia, but then rose as gold prices fell in Tuesday's European trade.
Premiums in Shanghai earlier retreated to $7 per ounce, half the incentive to new imports offered last week and back below the typical gap of $9 above comparable London quotes.
Next month's Chinese New Year holidays will mark the heaviest single period for private gold demand worldwide.
Gold prices in No.5 consumer nation Turkey today held above TRY 223,000 per kilo – a new all-time record high when first reached last August – as the Turkish Lira fell hard on the FX market following Erdogan's rebuke to Bolton.
The Lira dropped back near last week's 2-month lows versus the Dollar after the Turkish president called the request from Bolton and White House Secretary of State Mike Pompeo for Ankara not to avoid "slaughter" the United States' Kurdish allies when US troops pull out of a Syria a "grave mistake".
Likening the Kurdish YPG to ISIS, "If they are terrorists, we will do what is necessary no matter where they come from," said Erdogan.
Legal imports of gold into No.2 consumer nation India "tumbled by a fifth last year" reports Bloomberg "as high domestic prices deterred buyers and local stores remained well-stocked."