END_OF_DOCUMENT_TOKEN_TO_BE_REPLACED

GOLD PRICES held flat for the week in US Dollar terms Thursday but whipsawed in both Pounds and Euros, setting multi-month lows, as UK Prime Minister Boris Johnson declared a new Brexit deal with the European Union, claiming it means Britain can leave as last scheduled on Halloween.
Johnson must now seek approval in an extraordinary Saturday sitting by the UK Parliament, where he has so far lost 7 of 8 votes since taking office in July.
The Pound leapt to 5-month highs against the Dollar, pushing the UK gold price in Sterling terms down to its lowest since late-July at £1144, some 10.8% below start-September's new all-time record.
Thursday's trading then reversed all of that earlier £20 plunge per ounce however, leaving the price of Sterling unchanged from before Johnson's EU news. 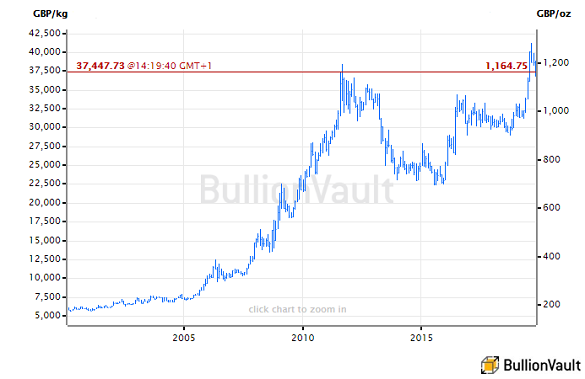 London's FTSE All-Share Index meantime rose 0.7%, defying a flat day's trading in other European markets.
China and Hong Kong also bucked local weakness overnight, edging higher as Beijing said that - while all US tariffs imposed on Chinese goods since their 'trade war' began last summer must, in the end, be removed - it is open to accepting the "phase one" interim deal discussed last week in Washington.
"Soft session for precious metals as hopeful Brexit headlines and US-China trade optimism weigh on the markets," says a note from the trading desk of Swiss refiners MKS Pamp.
Premiums for gold bullion landed in China also fell again compared to London quotes, cutting the incentive for new imports into gold's No.1 consumer market down to $5 per ounce – near its lowest so far in 2019.
"Gold has been trading in a broad range as market players await more clarity on Brexit, US-China trade talks and Fed’s monetary policy," says Indian brokerage Kotak Securities.
"We expect choppy trade to continue as market players react to these issues. However the general bias remains positive unless risk sentiment improves significantly."
With import duty on legal bullion flows now adding 12.5% to the cost, gold smuggling into India continues to make headlines, with a man arrested Monday at Delhi's IGI airport carrying $67,500 worth of metal hidden inside an electric iron.
India's household gold demand – the second largest after China – is on course to drop by 50% this month from last year's Dhanteras, the key Hindu gold-buying festival marking the start of Diwali, according to Surendra Mehta of the India Bullion & Jewellers Association.
Of India's 3 types of gold demand, says the IBJA secretary to the IANS news agency, only wedding demand is holding up, with regular demand "already low due to the liquidity crisis in the market" as India's economy shows signs of slower growth and festive-season purchases hit by high Rupee prices.
"Domestic demand is almost wiped out due to high gold prices and back-breaking import duty," says the Hindu Businessline, quoting "a leading jeweller", with
On top of that, weak consumer demand worldwide means around 30% of export orders placed at this August's India International Jewellery Show have since been cancelled.
In London's wholesale market, gold priced in the US Dollar held at $1490 on Thursday, while the Euro price lost and then recovered €10 per ounce on the UK-EU deal, trading down 0.5% for the week so far at €1342.
Over in Brussels, "This fair, balanced deal mean there is no need for any kind of prolongation," said outgoing European Commission president Jean-Claude Juncker after finalizing a revised Withdrawal Agreement with the UK's Johnson, who is now bound by UK law to seek an extension from the remaining 27 member states if he does have a Brexit deal approved by Parliament.
"It protects the rights of our citizens, and it protects peace on the island of Ireland."
But Northern Ireland's DUP party immediately said it will not back Johnson's deal in London's parliamentary debate and vote this Saturday, "because it drives a coach and horses through" the Good Friday agreement's clauses on defending the United Kingdom's integrity as a single nation – a point also being pursued in a court action against the Government by anti-Brexit campaigners.