END_OF_DOCUMENT_TOKEN_TO_BE_REPLACED

GOLD PRICES held unchanged against a falling US Dollar in London trade Thursday, keeping a $15 gain for the week so far but taking the metal down to multi-month lows for UK investors as world stock markets rose together with longer-term interest rates.
The yield offered to investors by 10-year Japanese government bonds rose near its least negative since April, costing new buyers 0.03% per annum against August's record 0.28%, after Tokyo unveiled its first fiscal stimulus package in 3 years, vowing to spend ¥26 trillion ($239 billion) to " overcome economic downside risks" according to Prime Minister Shinzo Abe.
With 1 week to go until the UK's snap General Election – and with the current Conservative government of Boris Johnson vowing that its first 100 days after victory will bring tax cuts and higher spending on health and schools – the UK gold price in Pounds per ounce slipped near 5-month lows at £1121, down by 12.4% from September's new all-time record high as Sterling hit its best in 31 months against the Euro plus a 7-month high against the Dollar.
"A Tory-led government is baked in today. The tail risk is that doesn't happen," says UK pensions giant Legal & General's currency analyst Willem Klijnstra, warning of a possible win by life-long Socialist "radical" Jeremy Corbyn's Labour Party despite all polls showing a clear lead for Johnson.
Once the Conservatives do win, Klijnstra adds, the focus of FX traders will then go "straight back to Brexit" – promised by Johnson for 31 January, with "a deep, comprehensive free trade agreement, it’s zero tariffs, zero quotas" promised for end-2020.
Today's move still left gold for UK investors 16.1% higher from this time last year, on track for its highest-ever annual average at £1090 per ounce. 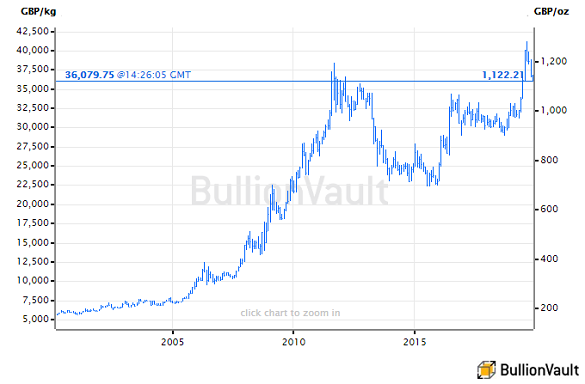 UK Prime Minister Boris Johnson yesterday denied he knew what Justin Trudeau was talking about when – in footage of a conversation they had with President Macron of France and the Netherlands' Mark Rutte at this week's 70th birthday events for the Nato alliance – he nodded and laughed as Canada's leader made comments about US President Donald Trump.
Calling Trudeau "two-faced" and then quitting the Nato summit early, "We will make a lot of progress," Trump added when asked about on-going US-China trade talks ahead of Washington's 15 December deadline for imposing yet more import tariffs.
"[But] China believes that if the two parties reach a 'Phase 1' deal," Beijing commerce spokesman Gao Feng told a press conference today, "[all] tariffs should be reduced accordingly" – a demand the US has yet to agree.
"With doubts emerging about US-China trade talks, we expect investor demand for safe-haven assets such as gold-backed ETFs to increase," say analysts at Australasian bank ANZ.
But Wednesday saw slight outflows from gold-tracking US trust funds, with the giant SPDR Gold Trust (NYSEArca: GLD) shrinking to its smallest since mid-September.
New US data meantime said the world's largest economy ran its smallest trade deficit in October since May 2018, coming below analyst forecasts but holding right in line with the last 10 years' monthly average at more than $44 billion.
No.2 economy the 19-nation Eurozone saw Gross Domestic Product expand 1.2% per year in the third calendar quarter of 2019, new figures confirmed, but retail sales were weaker than expected in October while German factory orders fell 5.5% from the same month last year.
Euro gold prices today slipped to €1328 per ounce, unchanged for this week so far, while US Dollar investors saw the price hold a $15 rise from last Friday at $1478.
UK data today showed a widening of wealth inequality across the world's 5th largest economy as property prices in London and the south-east continue to outstrip the rest of the country.
UK new car sales have fallen 2.7% year-on-year in 2019 with van registrations slumping 9.6% in November.