END_OF_DOCUMENT_TOKEN_TO_BE_REPLACED

GOLD PRICES erased the last 2 weeks' 1.7% drop Tuesday morning in London, touching $1475 per ounce against a weakening US Dollar as world stock markets struggled amid new salvoes in the widening global trade war.
Major government bond prices also rallied from their recent drop, pushing longer-term interest rates lower.
Gold priced in the Euro and Sterling also rose, reaching €1331 and £1134 respectively.
"I think it's better to wait for after [next November's US 2020] election, if you want to know the truth," said US President Donald Trump of a possible US-China trade deal ahead of today's fractious summit of Nato military alliance leaders.
"I have no deadline."
France's Finance Minister Bruno Le Maire meantime said the European Union will hit back at the United States if it goes ahead with tariffs of up to 100% tariffs on $2.4bn of French goods – from cheese to handbags – threatened by the White House in response to Paris starting to tax US tech giants Apple and Alphabet's local profits.
Trump announced yesterday that he's re-imposing steel and aluminum tariffs on imports from Brazil and Argentina – accusing them of "massive devaluation of their currencies" and demanding the Federal Reserve do likewise to keep Dollar exports competitive.
After the S&P500 index of US equities ended Monday with its 4th sharpest drop of the current calendar quarter, Tokyo and Hong Kong's stock markets fell – as did Paris and London – but Shanghai and Frankfurt rose.
"Due notably [to] the US Fed’s three rate cuts this year, the emerging consensus is for synchronised global economic growth going into 2020," says Japanese conglomerate Mitsubishi's strategist Jonathan Butler.
"That is nominally supportive of the industrial-facing precious metals," Butler says of silver, platinum and palladium, but with markets now betting that US interest rates will remain on hold in 2020, "[it] is weighing on gold prices.
Gold prices risk "further downside", Butler adds, if gold-backed ETF investors and derivatives traders continue to sell out, taking profit with bullion currently more than 13% higher in Dollar terms year-to-date.
US equities and crude oil have risen harder, however, as a tweet from CNBC re-tweeted by President Trump showed overnight. 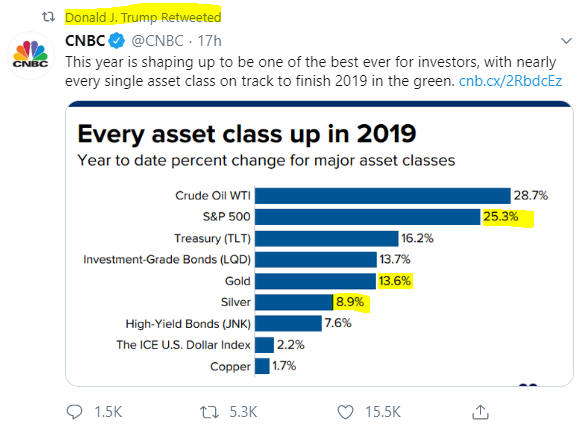 Silver and platinum prices also rose with gold on Tuesday, jumping back through $17 and $900 per ounce respectively.
With gold bullion "the fifth-best performing commodity in 2019," say analysts SFA (Oxford), writing for German refining group Heraeus, "traders will start to consider closing their positions to realise their gains."
Speculative betting in Comex gold futures and derivatives is also far more bullish than average, they add.
"At the start of a rally in the gold price, the speculative net long position is usually much lower."
Data from US regulator the CFTC says 2019 has seen Managed Money traders 3 times as bullish on gold prices on average as they were in 2018, holding a position equivalent to 425 tonnes of bullion.
Last week that position of bullish minus bearish bets eased back, but held fully one-half larger again at the notional equivalent of 639 tonnes. 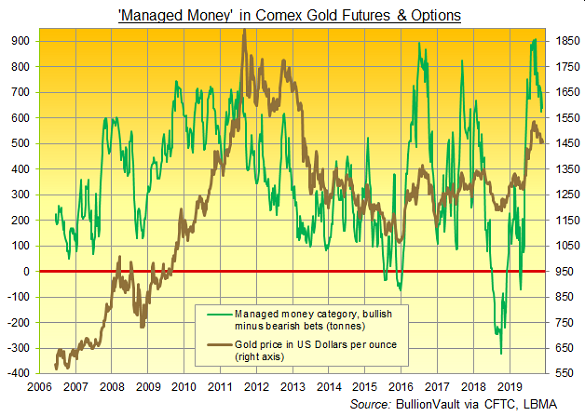 Back in London, and between firing out tweets lambasting the Democrat Party for the ongoing impeachment hearings, Trump said his repeated questioning of Nato's purpose has seen other members finally raise their military spending as agreed.
"It's inevitable that NATO should update itself in accordance with today's security priorities," said Turkey's President Recep Tayyip Erdoğan going into the meeting, repeating his call for other members to respect Ankara's attack on Kurdish YPG forces in Syria, allied with the United States until only last month – a demand rejected outright by France's President Macron last week.
Erdogan will also meet today with Greek Prime Minister Mitsotakis to discuss Ankara's new maritime deal with Libya, which claims to divide the eastern Mediterranean between them across waters currently claimed by Greece and Cyprus.