END_OF_DOCUMENT_TOKEN_TO_BE_REPLACED

GOLD PRICES drifted lower for the fourth session running on Thursday, touching 1-week lows at $1222 per ounce in London ahead of today's interest-rate decision from the US Federal Reserve – widely expected to leave policy unchanged.
The Dollar itself eased back on the FX market, helping cut the gold price in Euro terms to a 2-week low beneath €1070 and the UK gold price in Pounds per ounce to mid-October levels at £930.
Ten-year US Treasury bond prices edged higher ahead of the Fed's statement, cutting the yield offered to new buyers back to 3.22% from yesterday's fresh 7.5-year high.
A small rise in German Bund rates meantime kept Italy's BTP yield spread below 300 basis points – the 5-year high hit since May – even as the European Commission again rebuked Rome's new left-right coalition government over its 2019 deficit spending plans.
Instead of spending 2.4% of GDP more than it receives in tax next year, Italy will run a budget deficit 2.9% forecasts European Economic Affairs commissioner Pierre Moscovici, rising to 3.1% in 2020 and so breaching the European Union's agreed limits with plans for a basic household income, pension reform and new public investment.
"[This] deterioration of the deficit, united with the risks of lower growth...[mean] uncertainty and risks, both internal and external, are on the rise and are beginning to weigh on the pace of economic activity," the EC warns, cutting its 2019 economic growth outlook for Italy to 1.2%, joint lowest with the Brexit-set UK among European states. 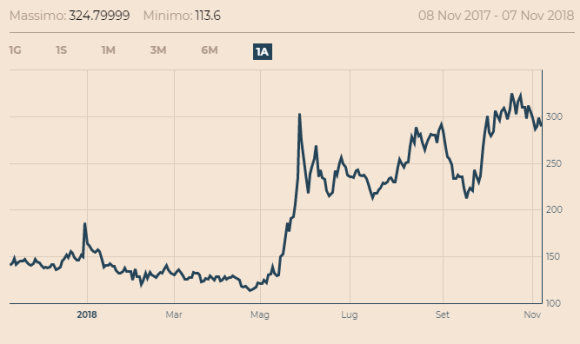 European stock markets failed to follow Asia higher after Wall Street rose sharply overnight.
"Gold is trading right at the November lows," says a note from the Asian trading desk of Swiss refiners and finance group MKS Pamp, pointing to what "should be next support" at the 100-day moving average of $1216 per ounce.
Wednesday had seen "decent buying action out of China [and] London were [also] on the bid" following the US mid-term election results, MKS adds.
Peaking at $1231 however, gold was then "sold off throughout the [New York] session" as the US Dollar rallied on the FX market.
Gold mining output from former No.1 producer South Africa fell by almost one-fifth in September from the same month a year before, new data said Thursday, hitting its lowest since 2014.
Gold imports to India – the No.2 consumer market after China – meantime showed a 42% year-on-year drop for October the Finance Ministry said, totalling less than 39 tonnes.
"The restraint was chiefly due to the steep rise in gold prices in Indian Rupees," says German finance group Commerzbank, noting that "bullion dealers and jewelers are running numerous special offers in a bid to revive gold demand during [this week's] Dhanteras and Diwali festivals" ending yesterday.
Venezuela's socialist president Nicolás Maduro is meantime struggling to get his country's remaining 14 tonnes of gold bullion reserves shipped back from the Bank of England, The Times reported this morning, as US sanctions against his government bite deeper.
"The Bank has refused to release the gold bars, worth about £420 million," The Times says, "[because] British officials are understood to have insisted [on] clarification of the Venezuelan government's intentions for the gold [over] concerns that Mr.Maduro may seize the gold, which is owned by the state, and sell it for personal gain."
With crude oil accounting for 98% of Venezuela's exports, shipments to the US fell by one-fifth last month from September, new data showed Wednesday.
Oil prices today popped only to fall to new 8-month lows after reports from Russia's state-owned Tass news agency said Moscow and Saudi Arabia are discussing possible output curbs for 2019.