END_OF_DOCUMENT_TOKEN_TO_BE_REPLACED

GOLD PRICES fell $10 at the start of London trade Thursday, falling back near Tuesday's 3-week low of $1480 against a rising Dollar as both Beijing and Washington signalled that a US-China trade deal may be coming together.
Gold prices then bounced weakly from $1481 in Dollar terms as New York's stock markets followed global equities upwards and opened at a new all-time S&P500 record.
Major government bond prices in contrast fell with gold, driving 10-year US Treasury yields sharply higher to the most since end-July at 1.9% per annum.
Gold priced in the Chinese Yuan fell harder, down almost 1% on the day, as the currency of gold's No.1 consumer nation extended its rally to stronger than 7 per Dollar – an 11-year low in the Yuan when breached this spring.
Speaking for China's Commerce Ministry, Gao Feng told the state broadcast that Beijing and Washington both want to cancel some trade tariffs on each other's goods, but they must cancel the same value of charges simultaneously for this new 'phase one' deal to stick.
A meeting between US President Donald Trump and China's President Xi Jinping may meantime happen in December, the White House said overnight, with the 2 sides set to seek a broader, long-term agreement at a summit on neutral ground, perhaps Switzerland or London.
"If we see the trade talks go further in a positive direction, we will see more pressure on gold," Reuters quotes researcher Vandana Bharti at Indian brokerage SMC Comtrade.
Gold and the Yuan became closely aligned versus the US Dollar starting in mid-2016, moving in the same direction in 71.2% of the weeks until May 2019, when Trump first threatened and then imposed a tariff hike from 10% to 25% on $200bn of Chinese imports.
Since then, the Yuan and gold have gone in opposite directions 56.5% of the time. 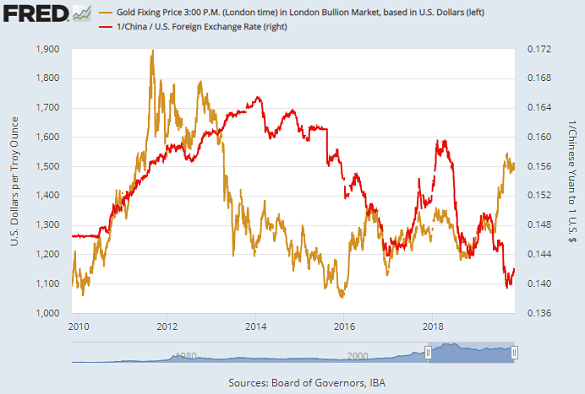 "Slow session for metals this morning," said Swiss refiner MKS Pamp's Asian trading desk earlier on Thursday, "[with] gold trading sideways between $1490-91."
The UK gold price in Pounds per ounce rose to halve the week's earlier 1.9% loss, recovering the £1160 level after the Bank of England saw 2 of its 9 policymakers unexpectedly vote against Governor Mark Carney's call for no change in interest rates, asking instead a cut from 0.75% to 0.5% ahead of Brexit.
Gold prices for German, French and Italian investors also rallied as the Euro currency fell against the Dollar, edging back up to €1345.
Meantime in India, the recent "downtick in [Diwali] gold demand had nothing to do with millenials" changing spending habits across the No.2 gold consumer nation, says P.R.Somasundaram of the mining-industry backed World Gold Council, responding to the latest claims that gold is losing its shine in the subcontinent in favor of consumer electronics and alternative investment products.
Two women arrested for smuggling gold through Chennai airport last week now claim they were kidnapped by gangsters from the hospital where customs officials had taken them to remove the kilogram of gold they had reportedly swallowed.
"The gang took them to a private hospital, and removed the gold from them after giving them a stomach wash," the duo claim.