END_OF_DOCUMENT_TOKEN_TO_BE_REPLACED

GOLD PRICES slipped back from yesterday's 1.6% short-covering jump on Wednesday, dropping as the Dollar rallied following stronger-than-expected US jobs data.

Spot gold retreated $7.50 per ounce to near $1200 yet again after the private-sector ADP estimate said US payrolls expanded by 230,000 in September, almost 25% ahead of Wall Street's consensus.

The gold price in Euros held firm above €1040 however as tensions between Rome and the European Union over Italy's government deficit grew worse.

Silver meantime held firm above $14.65 after spiking to 5-week highs on what traders and analysts also called short-covering by bearish speculators closing out their bets.

"The Russians and the Saudis [have] agreed to add barrels to the market quietly," says a source quoted by the Reuters news agency, "with a view not to look like they are acting on [US President] Trump's order to pump more."

The ratio of gold to oil prices – measured in terms of barrels per ounce – has fallen "below 14 for the first time since November 2014," says a note from specialist analysts Metals Focus.

"Bullion has some catching up to do against black gold," agrees strategist Jonathan Butler at Japanese auto-maker and trading conglomerate Mitsubishi. 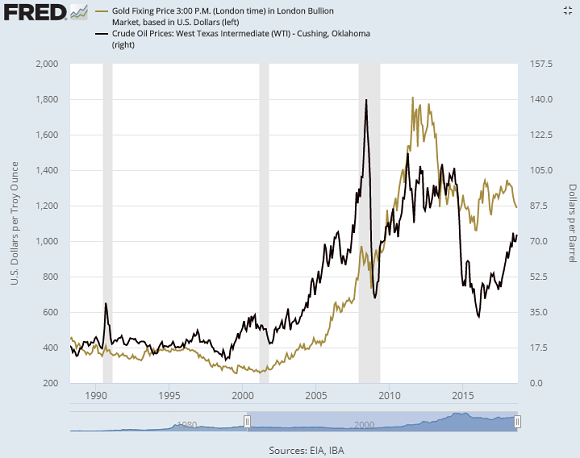 "We are investing in the smiles of Italians," said Italy's deputy prime minister, leftwing M5s lawmaker Luigi Di Maio today – "the desire to spend and to live with a better quality of life."

But the spread over German Bund yields jumped to 342 basis points on data reported by La Stampa, the widest since May's 5-year high.

"I think there is someone who wants to bring Italy to its knees to buy companies, banks, food companies, fashion, below cost," said Interior Minister Matteo Salvini of the rightwing Lega Party to Canale 5 television.

"Someone wants Italy weak and full of immigrants, but with this government it does not work."

"Reports on various news services say [Tuesday's $15] gold rally was due to 'haven buying' [due to] the Italian budget," says a note from UK brokers Marex Spectron, calling such claims "utter rubbish" because the Euro also rose on the FX market and the argument between Rome and Brussels has "already been festering for almost a week."

Instead, gold's rise yesterday "was purely and simply down to short covering," says Marex, as the metal's break back above $1200 "triggered buying" and gold priced in Euros "broke through a resistance point at €1030 [which] triggered some more buying."

Tuesday's rise in gold prices saw trading in Comex gold futures contracts jump 69% above its 52-week daily average according to data from the CME derivatives exchange.

Silver trading in Comex futures was more than 95% greater than its 1-year average.

"We may also see some short covering support gold," the analysis goes on, "[because] Comex non-commercial futures are currently in a record net short position [and] inflationary tailwinds could give gold a boost...as the impact of higher oil prices is digested by the market."

Alongside the metal's Euro price, the UK Pound price of gold held firm on Wednesday, trading above £925 per ounce as Prime Minister Theresa May told her Conservative Party's annual conference that she will end "austerity" in governemnt spending in 2019.

Calling for unity over her "Chequers deal" for next March's Brexit from the European Union, May could however face a leadership challenge after a backbench MP called for a vote of no confidence.