END_OF_DOCUMENT_TOKEN_TO_BE_REPLACED

GOLD PRICES held in a tight $5 range around $1213 per ounce Tuesday morning in London, moving sideways against a weaker US Dollar as commodities edged higher and Donald Trump issued a warning to other countries over doing trade with Iran – now back under US sanctions over its nuclear research program.
With gold prices barely $10 above last week's 12-month lows, world stock markets followed Wall Street higher, adding over 2.9% to China's main equity index as the Yuan extended its rally versus the Dollar on the currency market.
The UK gold price in Pounds per ounce meantime ticked a 2-week high just below £938 as Sterling fell after both the National Farmers Union and the Association of Police & Crime Commissioners warned against a "no deal" Brexit – now 60/40 likely according to trade minister Liam Fox, "uncomfortably high" odds according to Bank of England chief Mark Carney.
Trump's warning to other countries over the re-applied US sanctions was met by what the White House called "propaganda" from Tehran, where Iranian President Hassan Rouhani said "I don't have preconditions [for talks]. If the US government is willing, let's start right now."

Despite the rise in trade and geopolitical tensions, investment in gold-backed trust funds shrank by 1.6% in July new data showed today, pulling their value down to $94 billion, the lowest in 12 months.
"Gold price performance was a large contributor to [those ETF] outflows," says the mining-backed World Gold Council, posting the figures as a PDF, "as it fell over 2% in US Dollar terms."
Private investors, in contrast, grew their physical bullion holdings at the fastest pace since December according to data from BullionVault this morning, with major coin fabricators also reporting a sharp rebound in business during July's price drop.
The largest gold-backed ETF, the giant SPDR Gold Shares (NYSEArca:GLD), yesterday shrank again, reduced by 0.8% as investors sold once again.
That took the amount of gold needed to back the GLD's value down to a new 12-month low at 788 tonnes.
The GLD peaked in size with 1,353 tonnes at end-2012. 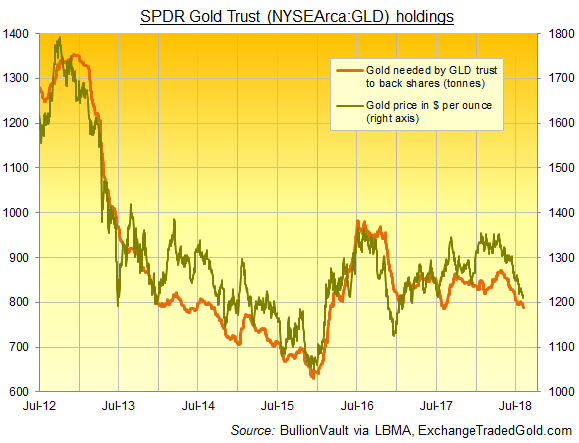 Silver's largest ETF product has also bucked the trend in gold-backed trust funds, with the iShares Silver Trust (NYSEArca:SLV) ending Monday at its largest size in almost a year to need 10,274 tonnes of bullion.
Silver outperformed gold prices in London on Tuesday, edging above last week's finish to trade at $15.46 per ounce.
Platinum prices also recovered Monday's drop, adding 1.9% to near last week's peak around $840.
The Chinese Yuan meantime extended its rally from Friday's new 15-month low, adding 1.0% versus the Dollar on the forex market.
Shanghai prices held unchanged in Yuan terms, showing a premium to London quotes of $4 per ounce – less than half the typical incentive for new bullion imports into the No.1 consumer market.