END_OF_DOCUMENT_TOKEN_TO_BE_REPLACED

GOLD PRICES spiked and then retreated against all major currencies in London trade Thursday, rising after the European Central Bank said it's ready to start easing monetary policy but new US data showed surprise strength.
Priced in the single Euro currency, gold touched €1290 for the first time since 14 December 2012, after the ECB, running monetary policy for the world's 2nd largest economic bloc, kept its rates and stimulus unchanged for July but clearly signaled the restart quantitative easing and more negative interest rates ahead.
US investors saw the gold price pop to $1432 per ounce, almost 10.0% higher from the start of last month, before erasing this week's 0.5% rise on news that US orders for durable goods blew past analyst forecasts for June.
Betting on US rates after next week's key Federal Reserve decision now sees a near 4-in-5 chance the Fed will trim a quarter-point to 2.50%, rather than cutting by half-a-point.
The UK gold price in Pounds per ounce meantime touched £1148, just 4.0% below its record peak of 6 September 2011, as new Prime Minister Boris Johnson gave his first speech to Parliament in the top job.
Eurozone stock markets also jumped on the ECB's news, adding 0.6% to the EuroStoxx 600 inside 5 minutes and taking that index towards its highest since January 2018.
"Gold is shining as investors continue to turn to this safe haven asset," claims Yahoo Finance, speaking to ETF provider Granite Shares and looking at the largest such product, the SPDR Gold Trust (NYSEArca: GLD).
The No.1 gold-backed ETF, the GLD in fact shrank in size Wednesday, with investor outflows since Monday's 13-month peak totalling some 0.4%.
Granite Shares' own gold ETF (NYSEArca: BAR) – launched as a "low cost" alternative in 2017 – hasn't seen net investor inflows since the end of May.
Since then, the GLD's closest competitor – iShares Gold Trust (NYSEArca: IAU) – has expanded by 6.7% according to data from the ETF provider and the mining-backed World Gold Council. 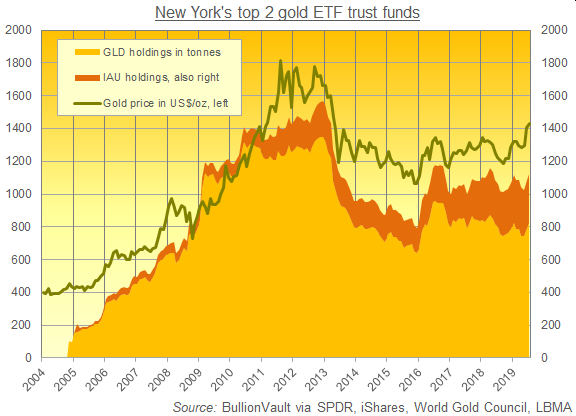 After US manufacturing data for July so far showed zero growth for the first time since the global economic slump of 2009, new data today said Germany's business climate is the most negative in 6 years, also "stoking fears of recession" according to one bullion analyst.
Changing key words and phrases in its latest monetary policy statement, "The Governing Council expects the key ECB interest rates to remain at their present or lower levels at least through the first half of 2020," said the European Central Bank Thursday morning, "and in any case for as long as necessary to ensure the continued sustained convergence of inflation to its aim over the medium term."
"The Governing Council also underlined the need for a highly accommodative stance of monetary policy for a prolonged period of time, as inflation rates, both realised and projected, have been persistently below levels that are in line with its aim."
New UK Prime Minister Boris Johnson meantime promised "the beginning of a new golden age" for the world's 5th (or possibly 7th) largest economy, starting with making planning for a 'no deal' Brexit from the European Union on 31 October a "top priority".
"Goodbye austerity," says a column in Johnson's former newspaper The Daily Telegraph, calling his plans so far " a new age of fiscal populism" and likening the UK Prime Minister's economic strategy to the "successful experiment" of 1930s' Imperial Japan.
Silver also popped and then retreated with gold prices on Thursday, setting new 13-month highs for Dollar investors at $16.65 before edging back 16 cents.