END_OF_DOCUMENT_TOKEN_TO_BE_REPLACED

GOLD PRICES again rallied from a dip near $1400 per ounce in London trade Wednesday, recovering from a 1-week low as world stock markets slipped and Western government bond yields eased back.
After Wall Street failed to set a third new record high in succession on Tuesday, Asian and European equities edged 0.4% lower on average.
With gold prices at $951 per ounce 10 years ago, the S&P500 index traded at 952.
Since the US stock market has risen 216% while gold today traded 48% higher. 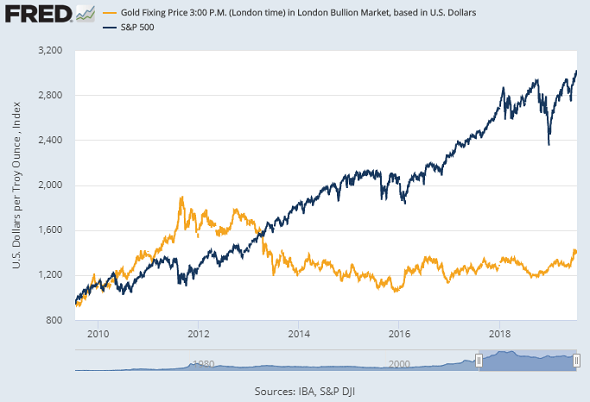 "The rise in US sovereign debt under Donald Trump has been a big but largely overlooked factor in surging gold prices," says Australia's Financial Review, quoting Perth Mint CEO Richard Hayes after the White House said Tuesday it expects 2019's budget deficit will breach $1 trillion.
Trump meantime continued to tweet against the "squad" of four Democrat women of color he began attacking last week, praising his Republican Party colleagues for backing him in yesterday's vote in Washington censuring the President's comments as racist – "the first House rebuke of a president in more than 100 years," according to the New York Times, "passed nearly along party lines, 240 to 187."
"This ridiculous slander does a disservice to our nation," reckons Representative Dan Meuser, Republican of Pennsylvania.

...opinion, they’re Americans. Now I’m entitled to my opinion, & I just think they’re left wing cranks. They’re the reason there are directions on a shampoo bottle, & we should ignore them. The “squad” has moved the Democrat Party substantially LEFT, and.....

"I don't have a Racist bone in my body!" protested Trump, while also saying his administration will investigate claims that Google is "working with the Chinese government."
"With a currency war most likely to be fought on USD/CNY and EUR/USD terrain," says a note from former London bullion market-maker and fixing member Deutsche Bank, "one approach would be to steer clear of the direct conflict.
"By far the most direct and simple way to trade the complexities of a currency war is by going long gold."
Betting on this month's Fed policy meeting now sees a 1-in-3 chance that Jerome Powell's team will cut interest rates by 0.50 points, while twice as much speculation sees only a quarter-point cut on 31 July.
Euro gold prices today held above €1250 per ounce, trading 86% higher from this point in 2009, while Italy's borrowing costs meantime held near yesterday's 14-month lows compared to Germany's costs, with the spread of 10-year BTP over Bund yields trading at 1.85 percentage points.
That's sharply down from end-May's 3.0% spread, hit just before European Central Bank chief Mario Draghi said the 19-nation Eurozone is ready to re-start quantitative easing, creating central-bank money to buy government bonds and lend to commercial banks.
Italy's "yellow-green" coalition of anti-establishment M5s and right-wing Lega parties is showing "many cracks" says Il Sole 24 Ore, reporting that "tensions are multiplying" over the government's flat tax plans, its budget deficit wrangling with Brussels, and now also accusations that Lega leader Matteo Salvini took campaign financing from Moscow in the so-called "Russiagate" scandal.
No.5 gold consumer nation Turkey is continuing to deploy the S400 missile system bought from Russia, says the Hürriyet newspaper, a move which US President Trump said yesterday means Washington will not sell F-35 fighter jets to its Nato military alliance partner.
Demand for gold bars in South Korea has nearly doubled by value so far in 2019 from the first half of last year according to three major banks, with sales rising 91.5% as gold prices rose 5.6% in Won terms.
The banks do not, however, say how much gold they bought back from investors re-selling gold bars.
The British Pound today rallied from 2-year lows as current Chancellor Philip Hammond rubbished claims that a no-deal Brexit – now increasingly likely according to the 2 remaining candidates for Prime Minister – will leave the UK better off.
That edged the UK gold price in Pounds per ounce down to £1130 – a price only beaten on 17 days in history.
British investors have seen the gold price in Pound terms rise 103% since July 2009.