END_OF_DOCUMENT_TOKEN_TO_BE_REPLACED

GOLD PRICES jumped Friday lunchtime in London, spiking above $1300 per ounce for the 1st time in a week after new data said the United States added next-to-no new jobs in February.
Crude oil meantime fell hard, dropping to 6-week lows, as major producer Norway said its sovereign wealth fund will sell out of some oil and gas companies "to make the government’s [pension fund] less vulnerable to a permanent drop in oil prices" as alternative energy use grows worldwide.
Adding just 20,000 net, the official Bureau of Labor Statistics' estimate for US non-farm payrolls missed Wall Street's consensus forecast by more than 93%.
Hourly earnings rose faster than expected however, up 3.4% per year, while the jobless rate in the world's largest economy fell back near half-century lows at 3.8%. 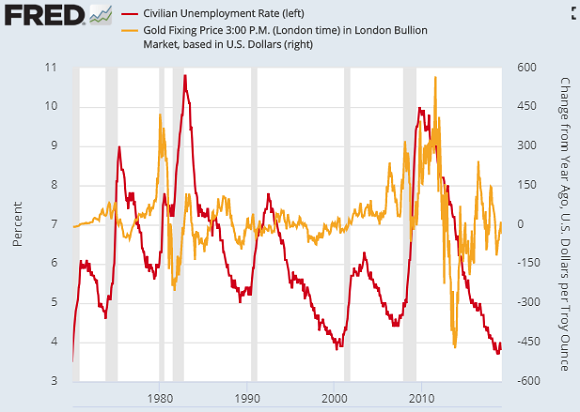 Friday's US jobs data saw the Euro rally half-a-cent against the Dollar from this week's drop to lows not seen since mid-2017.
Gold priced in the Dollar meantime reclaimed and then beat last weekend's level, reversing this week's earlier 1.0% drop to 6-week lows at $1281.
But for the week, gold prices rose faster for UK and Euro investors, recovering £995 and €1157 per ounce respectively to gain 1.6% from last weekend's level.
US and European stock markets meantime extended an overnight drop in Asian equities after China released what the Reuters news agency called "weak data" giving a "bleak economic outlook".
China's latest trade data showed exports plunging 16.6% per year in February, while imports slipped only 0.3%.
Together that slashed the No.2 economy's trade surplus to $4.1 billion in February 2019 from $39.1bn in January.
However, that meant China in fact avoided a trade deficit for the month marking its week-long Chinese New Year holidays for only the second time in the last decade.
New data from the Eurozone on Friday showed a stronger-than-expected bounce in industrial output in France, Italy and Spain, while new orders fell less than expected in powerhouse Germany.
"Investors should not believe that gold has broken out into a new bull market until bullion convincingly breaks above $1400," says the latest GREED & fear note from Asian investment house CLSA's equity strategist Christopher Wood.
A lack of solid gains in gold-miner stocks also "raises the risk of further near-term downside" says Wood, especially if "a successful US-China trade deal [should] trigger more 'risk-on' action in markets and potentially renewed monetary tightening expectations.
"Still GREED & fear continues to believe that a renewed bullish gold breakout is coming sooner or later."
"If you look at the short-term narrative," agrees Andrew Scott, a managing director in New York at French investment bank and bullion market-maker Société Générale, "we've got a bit of appeasement with risk [because] the Fed put has been reasserted" and the European Central Bank stayed dovish on Eurozone policy in its decision on Thursday.
"But there's an awful lot of risks that remain unresolved. Every client I meet sees US recession just around the corner...yet gold volatility is ridiculously low.
"That just seems emotionally wrong...By owning commodities that have been beaten up is a great way to be short Dollars without having to select a specific country."
Chinese gold prices held firm above this week's near 3-month lows in Yuan terms as the CSI 300 share index sank almost 4% on Friday.
That pushed the Shanghai premium above comparable London quotes up to $14.90 per ounce - the strongest incentive for new bullion imports to gold's No.1 consumer nation since 2013 this long after the big Chinese New Year buying spree.
India's domestic Rupee gold price meantime fell overnight to the lowest since early January, says Reuters, helping boost household demand in the No.2 gold-buying nation after shop prices set new all-time record highs at the end of February.
"Right now, demand is good," says Mukesh Kothari at RiddiSiddhi Bullions in Mumbai.
"The price correction is giving jewellers an opportunity to replenish inventory at lower levels."
Europe's benchmark Brent crude oil meantime slumped by 3.1% to 3-week lows at $64 per barrel on Friday after Norway's giant $1 trillion sovereign wealth fund said it will divest from fossil-fuel companies.
Initially celebrated by climate-change campaigners, the detail of the decision however shows that it covers only $7.5bn of smaller so-called 'E&P' companies looking to find and tap new resources, with the Oslo government rejecting a call to sell the fund's $40bn in major oil stocks in what Bloomberg calls a victory for Big Oil lobbying.