END_OF_DOCUMENT_TOKEN_TO_BE_REPLACED

GOLD BULLION headed for its lowest weekly close since the start of August today, losing over 1% against the rising Dollar from last Friday's finish as world stock markets rose yet again.
After Thursday's latest data showed the US trade deficit, jobless benefit claims and pending home-sales all worsening, GDP figures for July to September showed economic growth slipping from 3.1% per year to 3.0% annualized, beating analysts' forecasts of 2.5%.
Product price inflation more than doubled to 2.1%, but the core PCE measure of living costs – the Federal Reserve's preferred indicator – edged up to 1.3% as expected.
Large gold bullion bars traded in London's wholesale market briefly fell through $1265 per ounce after those US numbers, but added 0.5% for the week to €1091 in Euro terms after the European Central Bank on Thursday unveiled its "dovish tightening" plan for Eurozone QE bond purchases.
The Catalan parliament meantime voted to declare independence from Spain, while Madrid's Government asked lawmakers to approve taking back all executive powers from the region.
With one-third of deputies missing as 3 parties abstained, the 70 members of Barcelona's parliament in favor of Catalonia's independence equaled just 51.9% of potential voters.
Spain Ibex 35 index of stocks reversed all of Friday's previous 2.9% gain. Gold priced in both Aussie and Canadian Dollars showed a greater gain for the week than bullion in Euros.
Yesterday morning's Shanghai gold premium of just $6 over London quotes improved Friday towards the usual incentive of $8-9 per ounce, says a note from the Asian trading desk of Swiss refiners MKS Pamp.
But that "prompted little demand out of China," where gold imports from Hong Kong – formerly the only route for bullion into the mainland – fell last month to the lowest net total since January 2016 according to new data today.
Global physical gold demand rose 7% year-on-year between July and September, says the new Q3 2017 gold update from specialist analysts Thomson Reuters GFMS, "[but] this is effectively damning with faint praise.
"Physical demand was at its lowest level for a year [and] if we strip out the exceptional situation in 2016 it marked the lowest quarterly total since [the global economic recession of] Q4 2009.
"Coupled with only modest [gold-backed trust fund] ETF purchases," GFMS goes on, "this led to the largest surplus at the net balance level since Q4 2005...when prices averaged just $483." 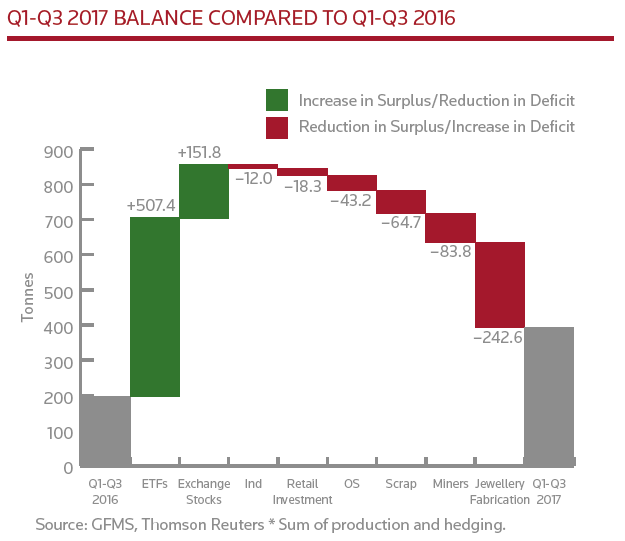 After the ECB's announcement drove the Dollar higher on Thursday, "Gold closed below the 100-day moving average," says the latest technical commentary from Russell Browne at bullion bank Scotia Mocatta's New York office.
"New support comes in at $1260.50, this month’s low...I am now bearish gold, targeting the $1250 level."
"If buoyancy in the greenback and equities continues," agrees MKS Pamp's trading team, "we could see gold testing the support at the October lows around $1260, with next key level at $1250.
"On the upside first resistance [sits] at $1280 followed by the all-important $1300 psychological level."
Gold prices in No.2 consumer nation India meantime rose this week to a $3 premium over global quotes, Reuters says, but "after Diwali, demand falters every year," it quotes wholesaler Daman Prakash Rathod at MNC Bullion in Chennai.
"This year, even during Diwali demand was lower than usual," he adds, with other reports citing a 30% drop from last year's key festive season, creating large stockpiles for traders who drove India's imports higher by one-third last month from September 2016 in anticipation of stronger consumer interest.
Gold bullion imports to world No.5 consumer nation Turkey are meantime "expected to post a new record this year," says GFMS new Q3 gold report, "driven by stimulus from the central bank and strong jewelry and coin demand."