END_OF_DOCUMENT_TOKEN_TO_BE_REPLACED

GOLD BULLION recovered this week's previous 0.9% loss to 7-week lows in Asian and London trade on Wednesday, touching $1281 per ounce as world stock markets stalled at record highs and bond yields retreated from the last month's jump.
The US Dollar slipped further from yesterday's 7-week highs against the Euro while Germany's Xetra Dax touched a new all-time record high.
Spain's Ibex 35 index sank another 2% however as Madrid's bond prices fell – driving borrowing costs to a 7-month high – after Catalonia's governor Carles Puigdemont said he may ask the regional parliament in Barcelona to declare independence next Monday following the 90% 'yes' vote in last weekend's referendum.
Declared illegal by Spain's courts and marred by violent police action at polling stations, the ballot achieved a 40% turnout.
"[Catalonia's leaders] have placed themselves totally outside the law and democracy," said King Felipe VI in a rare televised announcement, saying that "legitimate state powers [should] ensure constitutional order."
"In our view gold is likely to remain in demand...on the back of [such] political uncertainties in Europe," says the latest commodities note from German financial services group Commerzbank.
"Trading [today] leaves gold above the 100-day moving average, which appears to be lending support to the price."
Gold investment demand retreated Tuesday however, with the giant bullion-backed SPDR Gold Trust (NYSEArca:GLD) shrinking for the second day in succession.
Since the GLD last saw investor selling – back in the first week of September – the gold price had lost $75 per ounce by yesterday afternoon.
Prior to that move, gold gained $45 per ounce from early July's 4-month lows before the GLD found new net demand from investors. 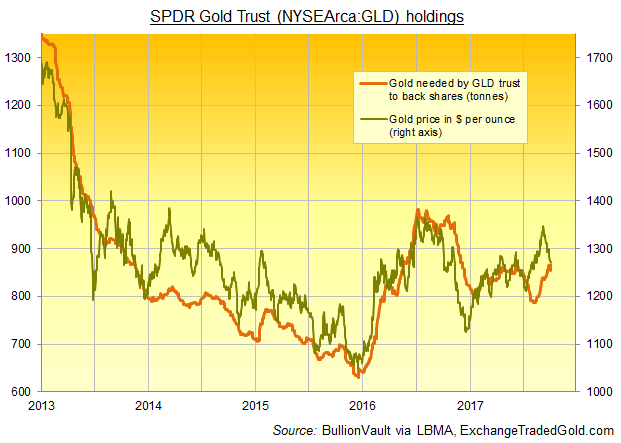 Tuesday's "generally muted session" saw gold prices recover as the Dollar eased back, says Swiss refining and finance group MKS, "[to] end importantly around the 100-day moving average at
$1272.50" per ounce.
"The yellow metal looks to be settling in for a period of consolidation around current levels...due to [this week's] Chinese holiday period. Short-term key support remains the 100-DMA pivot point."
"Gold has achieved our target of $1268/1263," says a technical analysis from French investment and bullion market-making bank Societe Generale, "corresponding to the 100 DMA, the 38.2% [Fibonacci] retracement from December and the 61.8% retracement from July."
"Daily indicators are now near a floor denoting a corrective recovery can't be ruled out...[but] $1295/1300 will be a near-term resistance."
With Spain's 2018 government budget now likely delayed, "the minority government [of Mariano Rajoy]  has depended on the support of the Basque Nationalist Party for support in [the Madrid] parliament," reports the Financial Times, "and [the Catalonian crisis] could make it even more difficult for the PNV to lend its support to the government's legislative initiatives in the future."