END_OF_DOCUMENT_TOKEN_TO_BE_REPLACED

GOLD BULLION held $5 below yesterday's late spike to 12-month highs in Asian and London action on Wednesday, trading at $1340 per ounce after a key US Fed policymaker said weak inflation warns against raising interest rates and new data showed gold-backed ETFs expanding strongly in August.
Consumer demand and physical buying in the wholesale bullion market remained weak however, with the Shanghai premium, over and above comparable London quotes, slipping below $3 per ounce as the Chinese Yuan rose to new 14-month highs against the Dollar.
That was the weakest level incentive for new gold bullion imports to China – the world's No.1 miner, importer and consumer market – since September last year, and barely 30% of the last 18 months' average.
Demand in the No.2 consumer market of India also remained weak Wednesday as prices rose for a fifth day running, with dealers reporting wider discounts to the global benchmark of London quotes from last week's $6 level despite the approaching peak festival season.
Asian stock markets meantime followed New York lower after Tuesday's drop in US equities as reports said North Korea's latest nuclear weapons tests "caused numerous and widespread landslides".
European shares gained however despite Russian president Vladimir Putin saying that Pyongyang's stand-off with Washington may prove "impossible" to solve, urging the US to avoid getting "emotional".
Silver today held firm versus the weakening US Dollar but stayed 2 cents below Tuesday's new 5-month high at $18.00 per ounce.
Platinum re-touched Monday morning's 6-month highs above $1013.
"I am concerned that the recent low readings for inflation may be driven by depressed underlying inflation," said Fed governor Lael Brainard – a key member of chair Janet Yellen's policy team – in a speech on Tuesday, "which would imply a more persistent shortfall in inflation.
"In that case, it would be prudent to raise the federal funds rate more gradually."
Brainaird's comments today saw traders bet for the first time in 3 months of traders on a possible rate cut by the Fed, back down to a ceiling of 1.00% sometime between now and next August.
Trading in US interest-rate futures currently puts the odds of 'no change' at greater than 50% until at least June 2018, with the likelihood of US rates being raised to reach a ceiling of 2.00% evaporating entirely from the betting on Fed meetings as far out as March next year. 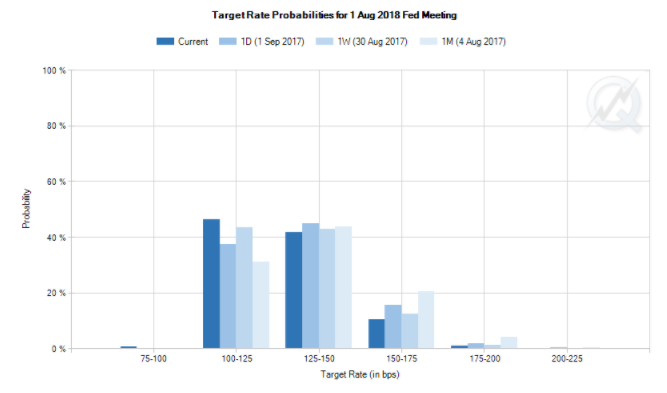 New data from the mining-backed World Gold Council meantime said gold-backed trust funds listed on world stock markets last month saw their strongest inflows of investor cash since February, needing an extra 35 tonnes of bullion to support their value.
Equal to more than 3 days of global gold-mine output, that reversed only half of July's ETF outflows however, taking the sector's aggregate gold bullion holdings up to 2,295 tonnes, a global total first reached in December 2010.
Despite US Dollar prices rising 15.6% so far in 2017 against a 9.1% gain in Sterling and a 2.2% rise in Euro terms, "European funds continue to lead inflows," says the World Gold Council of its new data, "accounting for nearly 79% of all inflows during the year."
Only one US-listed trust fund shows in the top 10 fastest-growing such vehicles for the year-to-date.