END_OF_DOCUMENT_TOKEN_TO_BE_REPLACED

GOLD BULLION headed for its first monthly loss in 5 on Thursday in London, nearing the end of February lower against most major currencies as new data said the United States' economy grew faster than analysts forecast at end-2018.
Instead of slowing to 2.3% annualized growth as predicted, US GDP expanded at a 2.6% pace in the fourth quarter, the BEA said Thursday.
Already slowing from Q3's pace of 3.4%, investment bank J.P.Morgan now expects US GDP growth to slow to just 1.5% in the first 3 months of 2019.
World stock markets also slipped with gold bullion on Thursday morning but held near a 2.6% gain for February, extending last month's rally from end-2018's slump, and following its  worst drop since 2011 with its strongest start to a year since 1987.
The US Dollar meantime fell to new February lows against its major peers after Donald Trump's former lawyer – a convicted liar himself – called him "a racist, a con man and a cheat", and the President's summit with North Korea's dictator Kim Jong Un ended early in Hanoi, Vietnam, with no deal on denuclearization of the Korean peninsula.
Nuclear power Pakistan says it will release tomorrow the Indian MiG fighter pilot it captured in this week's exchange of air strikes, calling it a "peace gesture" to its nuclear-armed neighbor.
Falling to $1321 per ounce in Dollar terms, gold also fell slightly this month against the Euro currency, dipping below €1160 for the first time in 2 weeks. 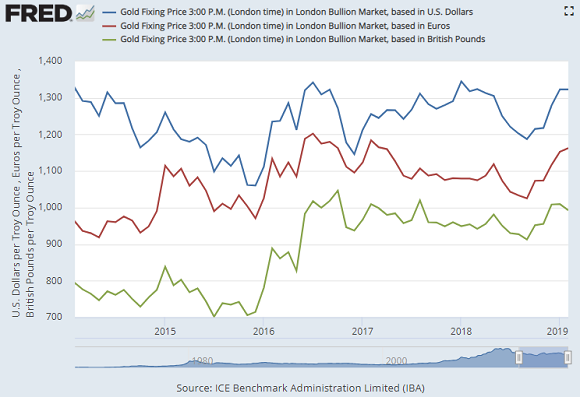 Over on the forex market, the British Pound meantime eased back from yesterday's 8-month high against the Dollar, helping gold bullion priced in Sterling terms rally £6 per ounce off an overnight drop to £990 – the cheapest since end-January.
Riven by infighting over anti-Semitism, the UK's opposition Labour Party today confirmed it will call for a second referendum on Brexit after losing a Parliamentary vote pressing for a Customs Union with the European Union after 29 March.
"It was all about the sanctions," Trump said today of Kim's offer to stop developing North Korea's nuclear weapons.
"They wanted the sanctions lifted in their entirety and we couldn't do that."
Spanish police are meantime investigating last Friday's violent assault and "interrogation" of staff at North Korea's embassy in Madrid by 10 masked assailants, apparently armed with fake guns.
"A fairly slow day once again in Asia today," says a gold bullion trading note from Swiss refiners and finance group MKS Pamp, "with the metals still remaining on the backfoot.
"Chinese participants were on the offer and gold slumped back below $1320."
On the FX market Thursday China's Yuan edged back from its highest Dollar value since July.
That held the Shanghai gold premium – meaning the extra paid for bullion already landed in the metal's No.1 consumer market versus London, the global trading hub – at $10 per ounce, just above its historic average.