END_OF_DOCUMENT_TOKEN_TO_BE_REPLACED

GOLD BARS traded in London's wholesale market fell again in price on Friday, erasing the last of this week's earlier gains to multi-month highs as world stock markets extended their rally from end-2018's steep losses.
Priced in the Dollar, gold today traded $25 per ounce below Tuesday and Wednesday's 10-month peaks above $1346.
Euro gold prices moved €20 per ounce below Wednesday's new 22-month high at €1186., slipping back below last week's finish.
The UK gold price in Pounds per ounce meantime erased all of last week's gain, as well as this week's earlier rise to 17-month highs above £1033, to trade back down at £1018 per ounce.
Global equity prices rose in contrast, with the MSCI World Index now recovering three-fifths of last year's 20% plunge from new all-time record highs.
"[Because] global growth will slow this year," say London-based consultants Capital Economics, "we doubt that equities will continue to do so well.
"[So] we think that the rally in gold and other safe havens has further to run."
Delayed until next week by the New Year's shutdown of US government agencies, the United States' end-2018 GDP data is expected to show annual growth of 2.4% according to consensus forecasts.
But the world's largest economy will then slow to 1.5% annual growth in the first 3 months of 2019 reckons investment bank J.P.Morgan.
That would be the slowest pace since Q1 2016, when the Dollar price of wholesale gold bars saw their steepest quarterly rise in more than 25 years. 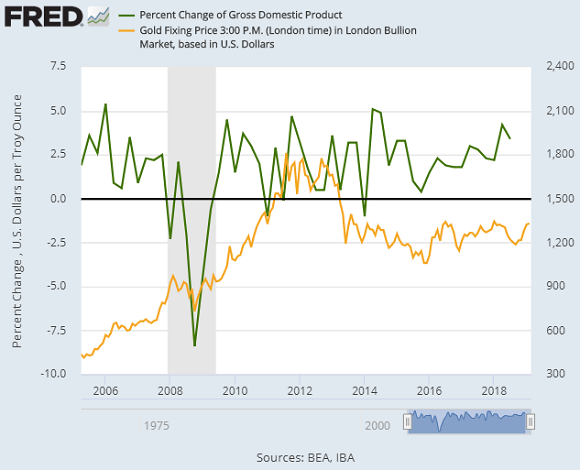 Thursday's drop in the US Dollar gold price saw investors pull money out of New York-listed gold-backed ETF trust funds.
Having seen its first inflow of the month on Wednesday's 10-month peak in the gold price, the GLD shrank yesterday to a new 2019 low, needing fewer than 790 tonnes of bullion bars to back its stock-market value.
The cheaper iShares Gold Trust (NYSEArca: IAU) grew in contrast, swelling its number of shares in issue by another 0.4% and taking the IAU gold ETF's gold-bar backing up to a new all-time record of 300 tonnes.
Gold mining No.1 Barrick (NYSE: GOLD) is meantime "considering a hostile bid" for No.2 miner Newmont (NYSE: NEM), the Globe & Mail reports, with a $19bn takeover planning to sell NEM's Australian assets to No.7 producer Newcrest (ASX: NCM).
The rumor comes 3 days after US regulators cleared Newmont's proposed $10bn takeover of Goldcorp (NYSE: GG), itself a response to Barrick's late-2018 mega-merger with West Africa specialist Randgold Resources.
Wholesale silver bar prices in London's bullion market meantime edged 10 cents higher for the week to $15.89 per ounce, down 2.0% from Wednesday's new 7-month high.
Platinum prices extended their rally to 3.0% for the week, re-touching their highest level of 2019 so far at $832 per ounce.