END_OF_DOCUMENT_TOKEN_TO_BE_REPLACED

GOLD edged higher on Monday and platinum prices neared last week's 1-month highs as world stock markets rose ahead of getting any details about the 'phase one' trade deal apparently agreed between the US and China, writes Atsuko Whitehouse at BullionVault.
Beijing called the agreement with the US a "positive" while also threatening "consequences" against Germany if Berlin moves as proposed to block sales of equipment from Chinese tech giant Huawei over national security concerns.
"The Chinese government will not stand idly by," said Ambassador Wu Ken at a Handelsblatt event Saturday.
With all precious metals set to show double-digit gains for 2019 in US Dollar terms, spot gold rose Monday to $1477 per ounce, adding over 15% for the year in US Dollar terms.
The Dollar itself meantime slipped against other major currencies, cutting its 2019 rally below 0.9% and helping avoid "a drastic sell-off in gold" on the US-China trade deal news according to Hareesh V. at Indian financial services provider Geojit.
What's more, he tells Reuters, "[the market] already discounted this news in the last couple of weeks."
Silver prices meantime rose 0.6% to $17.05 per ounce Monday morning in London, up 10% so far this year, while platinum gained another 0.4% to $932 per ounce, showing a year-to-date gain of 17%.
Platinum prices surged $30 per ounce last week after South Africa – source of 70% of the metal's new mine output – was hit by power cuts from monopoly electricity supplier, the state-run Eskom.
Latest data show that hedge funds and other leverage speculators in Nymex platinum futures and options increased their bullish betting 13% last week net of bearish bets.
That took the net speculative position of Managed Money traders to its largest since end-January 2018, back when prices tried but failed to hold a rally above $1000 per ounce. 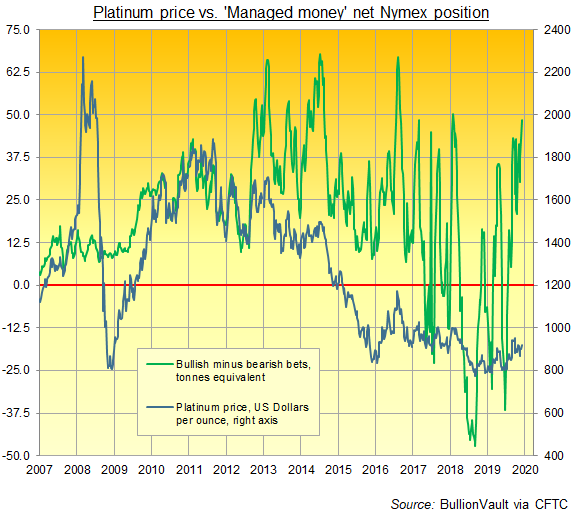 In contrast to platinum bets, speculative traders trimmed their bullish betting on palladium and also cut their bullish betting on gold and silver to multi-month lows, according to last week's data from US regulator the Commodities Futures Trading Commission (CFTC).
But with platinum prices reaching only a 1-month high of $949 last week, sister metal palladium – used in autocatalysts for gasoline engines, rather than diesel – rose to a record $1966 on Friday, adding 56% for 2019 so far and trading only $20 lower today.
Eskom last week applied a so-called "Stage 6" blackout for the first time, removing 6,000 megawatts of power from South Africa's grid amid breakdowns at coal-fired power plants in the No.1 platinum and No. 2 palladium producer.
Gold prices for European investors today dipped to €1325 as the pan-European Stoxx 600 index added over 1% to set a new record high despite new survey data saying that manufacturing activity across the 19-nation currency union is shrinking for the 11th month running in December.
UK gold prices in British Pounds meantime slipped 0.3% to £1104 per ounce as Sterling extended its rally after the solid election victory for pro-Brexit prime minister Boris Johnson's Conservatives.
Data compiled before Friday's result showed UK business activity slowing to its weakest since mid-2016's shock Brexit referendum result.
The Lira currency of world No.5 gold consumer Turkey meantime fell the most in 2 months as President Recep Tayyip Erdoğan said he will shut military bases used by Nato-ally the United States after lawmakers in Washington unanimously passed a resolution recognizing the Armenian genocide of 1915.