END_OF_DOCUMENT_TOKEN_TO_BE_REPLACED

GOLD PRICES rose on Friday morning in London while the Dollar fell ahead of the US Fed Chairman's speech at the Jackson Hole Symposium, writes Steffen Grosshauser at BullionVault.

Gold rose to $1191 after it slipped to $1184 in the previous session when it ignored weaker-than-expected US housing and disappointing manufacturing PMI data but still stood $24 above the 19-month low of last week.

Other precious metals silver, platinum and palladium were all up around 1%.

Markets were awaiting the US Fed Chairman Jerome Powell's speech at the annual central bankers' meeting in Jackson Hole, Wyoming, later today for clues on the pace of further rate increases.

US policy makers are expected to agree on further rate hikes this and next year, despite US President Donald Trump's disapproving comments, saying he was "not thrilled" with the Central Bank's policy.

"I will speak for myself but I think this is true around the table," said Dallas Fed chief Robert Kaplan on Thursday. "We are trying to do things that are going to extend the economic expansion as much as possible."

The US Dollar fell on the currency market today, now set for its biggest weekly decline since March, although no breakthrough was achieved in the trade discussions between US and Chinese officials after another round of tariffs were imposed earlier this week.

European shares edged up after a mixed session in Asia, while crude oil prices further rose on Friday as US sanctions on Iran, the third-biggest oil producer within Opec, are expected to significantly cut crude volumes.

"The environment for gold remains challenging," said Carsten Menke, a commodity analyst at Swiss private bank Julius Baer. "That said, a lot of bad news is priced in and even in the short term, there should be more upside than downside. We upgraded our view to 'constructive' and bought a first position."

"Speculative traders are net short for the first time since the turn of the century, suggesting that prices are bombed out on current levels," Menke added. "Hence, it is very unlikely in our view that gold falls back towards the lows reached during the past year’s bear market."

Gold is down around 9% year-to-date and fell below the psychologically important $1200 support level for the first time in a year earlier this month, despite international trade disputes and emerging markets’ currency depreciation as investors turned to the US Dollar or interest bearing assets and equities instead. The yellow metal is now heading to its fifth consecutive monthly decline.

An increasing greenback, rate hikes, low inflation and the longest equities bull run in Wall street history put gold under pressure. Especially the US Dollar and gold traded in a close inverse relationship during the last year: 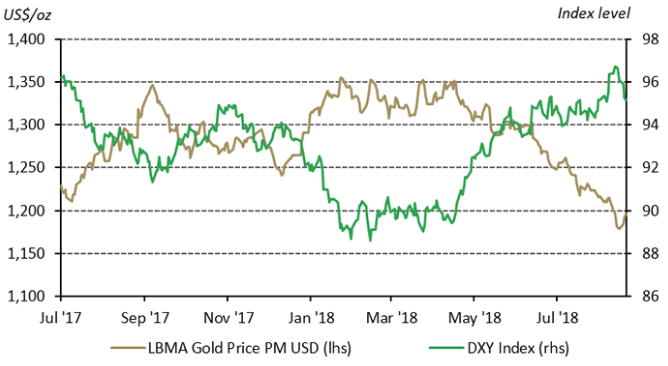 Negative sentiment towards gold is also reflected in the record net-short positions of speculative investors in Comex gold futures and options. The short position, at the equivalent of 670 tonnes, is the highest since the data collection started in 1993, according to a trade note of Australian financial group ANZ.

But this extremely bearish position also brings a potential for recovery later this year, according to market-development organization the World Gold Council (WGC).

"The Dollar's strength has been one of the most important drivers of gold's performance this year as confrontational trade rhetoric and sanctions has so far played in favour of the US," the report said.

"In recent years, a large increase in short positions has been followed by a sharp rally in gold. And while net shorts were more prevalent in previous decades, there have been structural changes that make these positioning levels different and likely short lived."

Consumer demand is likely to be supportive in the second half of the year and short positioning may quickly reverse, should one of the many current macroeconomic risks materialise, increasing investment demand."

"A period of heightened geopolitical risk with the potential to impact the global economy could be supportive of gold even if the dollar were to strengthen," the report continues.