END_OF_DOCUMENT_TOKEN_TO_BE_REPLACED

GOLD PRICES extended last week's rebound to reach 4-week highs on Monday as the US Dollar continued to fall and the US yield curve sent more warning signs of recession ahead, writes Atsuko Whitehouse at BullionVault.
Global stock markets were mixed, with Tokyo adding 1.0% but Madrid losing 0.5% while New York's S&P500 slipped 0.4% but the tech-heavy Nasdaq added 0.2%.
After making the strongest weekly gain since March, gold bullion prices in London rose 1.1% from Friday afternoon's close to reach $1773 per ounce, the highest spot price since 5 July.
Rising 2.3% in US Dollar terms last week, gold bullion prices still ended July down 3.7% with a 4th consecutive monthly decline.
The Dollar index – a measure of the US currency's value versus its major peers – meantime fell 0.5% on Monday, extending its drop from early July's 2-decade high to 2.9%, while major government bond prices continued to rally with gold prices.
That pushed down 10-year US Treasury yields to 2.62% per annum, the lowest borrowing cost for Washington since early April.
The spread between two- and 10-year Treasury yields – a closely watched part of the yield curve as it can signal a recession when the short end is higher than the long – widened to 23 basis points, the deepest inversion since September 2000. 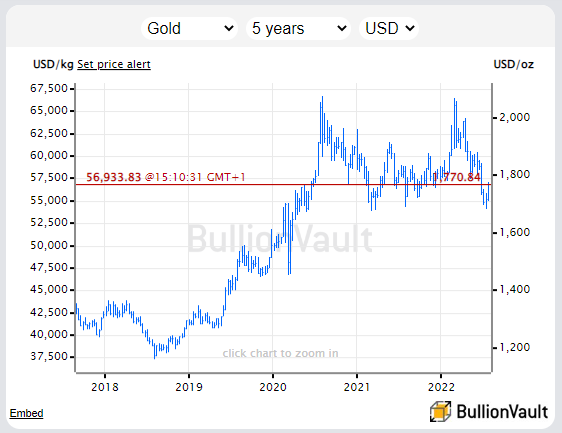 "Inverting yield curves, rising inflation, weakening housing data, and slumping surveys have all driven the increase [in recession probability] in the US," says Swiss bank Credit Suisse in a research note, putting a 1-in-4 shot on the United States being in recession between 6 and 12 months from now.
Despite economists being unlikely to call America's Q1 and Q2 contractions a recession because employment remains strong, "It is likely recession probabilities rise further in the coming months," Credit Suisse goes on, "if policy rate hikes cause further curve inversion and cyclical data continue to deteriorate."
"Markets are now locking horns with central banks in terms of their efforts to aggressively hikes rates to try and rein in inflation, with markets taking an increasingly confident view that central banks will have to abandon their inflation quest due to looming recession risks," said Marc Ostwald, chief economist at derivatives brokerage ADM Investor Services.
Speculators in US Fed interest-rate futures today priced in a 70% probability of a half percentage point rise at the central bank's September meeting, cutting dramatically their previous view that a 3rd hike of 75 basis points was likely according to derivatives exchange the CME's FedWatch tool.
Gold priced in Euros meantime edged higher Monday at €1730 per ounce, as Euro strengthened against the US Dollar despite German retailers reporting their worst year-on-year drop in sales since the early 1990s.
The UK gold price in Pounds per ounce edged lower at £1449, as inflation running at 4-decade highs and 'hawkish' comments from a Bank of England rate-setter raised the prospect of the UK's first half percentage-point rate hike since 1995 at this Thursday's meeting.
Gold investment through giant gold-backed ETF the SPDR Gold Trust (NYSEArca: GLD) rose on Friday for the first time since 17 June, snapping the fund's run of 5 consecutive weekly liquidations.