END_OF_DOCUMENT_TOKEN_TO_BE_REPLACED

GOLD PRICES slipped at the start of the new trading week Monday as world stock markets fell hard and the US Dollar held strong amid a further escalation of the worsening global trade war, writes Steffen Grosshauser at BullionVault.
Gold edged $3 lower from last week's close of $1270 per ounce after US President Donald Trump said he will impose a 20% levy on all EU-assembled cars unless the European Union cuts existing tariffs on US goods, a move the EU says it would have to "respond" to.

The United States is insisting that all countries that have placed artificial Trade Barriers and Tariffs on goods going into their country, remove those Barriers & Tariffs or be met with more than Reciprocity by the U.S.A. Trade must be fair and no longer a one way street!

Chinese media meantime called US protectionism "self-defeating" and a "symptom of paranoid delusions" that must not distract China from its path to modernisation, after Trump said he will bar Chinese investment in US technology firms.
Officials from both China and Europe also vowed on Monday to oppose trade protectionism and defend a multilateral trading system.
"There are specific factors that will actually push the Dollar higher, given the trade tensions as well as the booming US economy versus other economies," reckons Singapore-listed bank OCBC's bullion analyst Barnabas Gan.
"Gold prices are very much influenced by the Dollar movement rather than anything else," says Gan.
"It's less of a safe-haven demand into gold but rather a reaction to USD strength."
Rebased to the date of Trump’s inauguration as US president in January 2017, the gap between gold priced in Dollars and gold priced in all other currencies stretched to $125 per ounce at the start of 2018.
Over the last 6 months that gap has since shrunk to $30 as the Dollar has risen on the currency market. 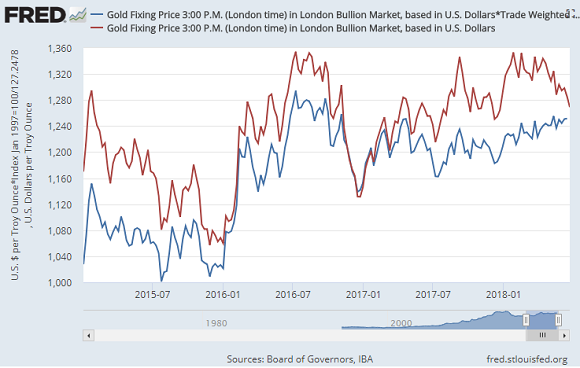 The US Dollar index edged back Monday from last week's 11-month highs on the FX market, but the Chinese Yuan sank as the People's Bank announced a cut in the commercial banking sector's reserve requirements worth $108 billion according to Bloomberg.
The PBoC also lent $31bn to China's commercial banks in a further bid to boost liquidity and lending, says Reuters.
Aiming to reduce systemic risk across its financial sector, Beijing is pushing to reduce the amount of so-called "shadow lending" in China, forcing borrowers to swap non-bank loans into the formal, regulated sector.
Monday's news out of China saw the Yuan fall to its lowest level versus the US Dollar since late 2017, erasing the last half-year's 5% rise.
Despite an overnight rise in Shanghai gold prices, that helped keep the premium over global quotes for bullion delivered inside the No.1 consumer country at just $5 per ounce, barely half the typical incentive for new imports.
"Until last week, there was vague optimism that we can muddle through this," said Daiwa Securities' strategist Hirokazu Kabeya of the stock market sell-off.
"But now it looks like, unless the US lays down its arms, things will be getting more chaotic."
Over in Turkey meantime – the world's 5th biggest gold-consuming nation – President Recep Tayyip Erdoğan claimed victory in Sunday's presidential and parliamentary election on Sunday, winning nearly 53% of the vote and securing another 5-year term.
Turkey's Lira first surged but then erased the gains on the FX markets.
Polling data showed Erdogan's closest rival, Muharrem İnce of the secular CHP party, received around 31% of votes.
Erdogan will now gain more executive powers as decided in a controversial referendum held last year.