END_OF_DOCUMENT_TOKEN_TO_BE_REPLACED

GOLD PRICES held flat Monday morning against a falling US Dollar, trading up to $1236 per ounce as the US currency retreated from 3-week highs versus the single currency Euro ahead of this coming Wednesday's April decision on interest rates from the Federal Reserve, writes Steffen Grosshauser at BullionVault.
Asian and European stock markets slipped and commodities dropped another 0.5% from last week's new 2016 highs, as US Treasury bond yields edged back from 1-month highs at 1.89% per annum on 10-year debt.
The British Pound meantime hit a 10-week high against the Dollar above $1.45, pushing the gold price in Sterling down to 2-month lows beneath £850 per ounce.
Silver prices slipped through and then recovered the $17 per ounce level.
"There's nothing 'fundamental' about the metal's surge from below $15 over the past five weeks," according to Chinese-owned ICBC Standard Bank's London HQ in a note.
Comex futures and options last week saw bullish speculative bets, net of bearish bets, hit the second-highest level on US regulator the CFTC's 20-year records. 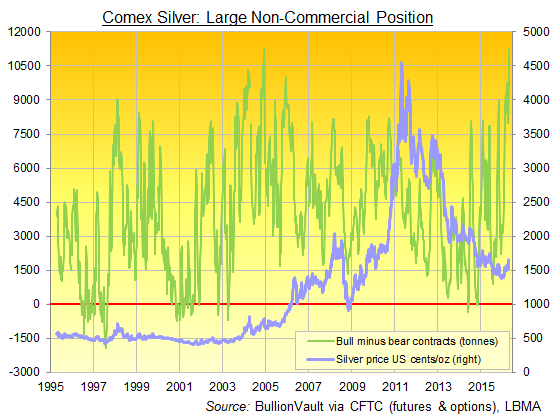 "Should [the Fed] continue to hint at further rate delays, we could see the Dollar sell-off resume," reckons US brokerage INTL FCStone's analyst Edward Meir, "in which case most commodity markets, including gold, could push higher.
"However, gold's upside will be capped by the fact that funds will be throwing their money at various other markets that are moving up more decisively than gold, while the continued strength in US equities will also act as another drag."
The Bank of Japan is expected to expand market stimulus at its two-day policy review starting this Wednesday, according to a Bloomberg survey of economists.
Amid speculation that Tokyo's central bank could push interest rates for the world's 3rd largest economy even deeper into negative territory, Japan's Nikkei stock index ended Monday slightly down after it jumped to an 11-week high last Friday, while the Yen rose again versus all major currencies after its sharpest weekly drop since October 2014.
"Gold is in a corrective phase after recent gains," says investment and bullion bank HSBC's analyst James Steel.
"Each time it has rallied to $1270-$1282, it has fallen back on profit-taking, especially when the Dollar has rallied."
With the Fed meeting likely to spur unease this week, “A further correction is likely," says Steel, "but the return of India to the global market [after a 1-month strike strike over a new sales tax] and the possibility of firmer oil prices may support prices and keep the market above $1220."
Overnight in Asia, gold trading turnover "was noticeably lighter" despite the $15 price drop from Friday morning, notes Swiss refining and finance group MKS.
"Chinese investors remained fairly quiet throughout the day [but with] some modest buying going through."
The new Shanghai Gold Fix – launched as a Yuan-price benchmark last Tuesday – today came in some $3 per ounce above spot-trading London quotes at the 2.15pm auction, equal to $1237.73 per ounce as the Chinese currency edged back to 6-week lows versus the Dollar ahead of this week's US Fed meeting.