END_OF_DOCUMENT_TOKEN_TO_BE_REPLACED

GOLD PRICES rose Monday morning in London as oil prices stabilized from a sharp plunge following news that major producer nations had failed to reach an agreement on cutting output this weekend in Doha, Qatar, writes Steffen Grosshauser at BullionVault.
European stock markets recovered early losses but Asian equities closed sharply lower, plummeting from the highest weekly close in four months as Shanghai's SSE Composite and Tokyo's Nikkei 225 lost 1.4% and 3.4% respectively.
Silver retreated to around $16.22 from Friday's peak of $16.37 per ounce, its highest level since June 2015.
"The main focus on Monday will be the impact the oil markets have on the rest of the markets," reckons Edward Meir, analyst at US broker INTL FCStone.
"From the initial indications based on the oil news out this weekend, things will turn rather ugly."
Dipping $4 per ounce overnight to $1230, gold prices then rose above last week's closing level in London to trade at $1240 as New York dealing began.
Bullish gold betting on US futures and options contracts grew to its largest level amongst speculative traders since the all-time price peak of August 2011 last week, new data from US regulators showed at the weekend, while bullish betting on silver prices set a new record high. 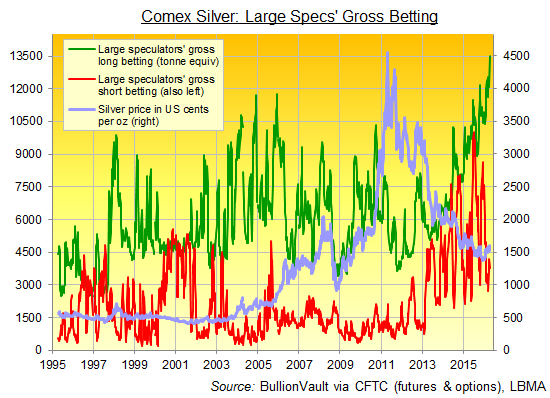 "The failure of the Doha meeting for a crude oil production freeze should lend support to gold prices in any risk-off rally," says Australia's ANZ financial services group.
"Early [gold] buying in the Asian time zone was about 'risk-off selling' in response to the Doha failure," agrees Ric Spooner, chief analyst at financial bookmakers CMC Markets in Sydney.
Gold priced in commodity currencies such as the Australian and Canadian Dollars rose sharply overnight, reclaiming half of last week's losses as their FX rates sank.
So did the gold price in British Pounds as Sterling fell hard following Tory government forecasts that quitting the European Union after June's UK referendum would dent the world's 5th largest economy permanently amid a series of forecasts called "absurd" by so-called "Brexit" supporters.
Countering the Doha meeting's failure to agree output cuts, however, a strike by Kuwaiti oil workers threatened up to half-a-million barrels per day.
Meantime in India, jewelers' trade body the GJF joined the IBJA in calling an end to strikes begun at end-February over a new 1% sales tax on gold items.
Some artisans had reportedly got around the strike by making imitation jewelry, fearing for their job security and steady income.
Next month brings the key Hindu festival of Akshaya Tritiya, considered by many to mark an auspicious day for new ventures and investments, including in gold.