END_OF_DOCUMENT_TOKEN_TO_BE_REPLACED

GOLD PRICES edged lower to $1216 per ounce on Monday morning in London, writes Steffen Grosshauser at BullionVault, but held above Friday's near 6-week low as the US Dollar traded around 5-month lows on the currency markets.
Major government bond prices also slipped, nudging yields higher as European equities gained over 1%.
China's stockmarkets and the Shanghai Gold Exchange were shut for the Ching Ming festival.
"We could see the markets start coalescing around expectations that the Fed will now put a rate increase back on the table," reckons US brokerage INTL FCStone's analyst Edward Meir, "perhaps for some time in May or June
"Gold could fall below $1200 soon and test key double-bottom support at around $1170-1175."
"We think consolidation could remain the theme in the near-term," agrees a daily technical analysis from bullion bank ScotiaMocatta, "[but] gold's uptrend remains intact as it continues to trade above its 100-period [moving average] at $1195."
Gold rallied almost 17% against the US Dollar in the first 3 months of 2016, marking its biggest quarterly rise in nearly 30 years as expectations of a second interest-rate hike by the US Fed faded. 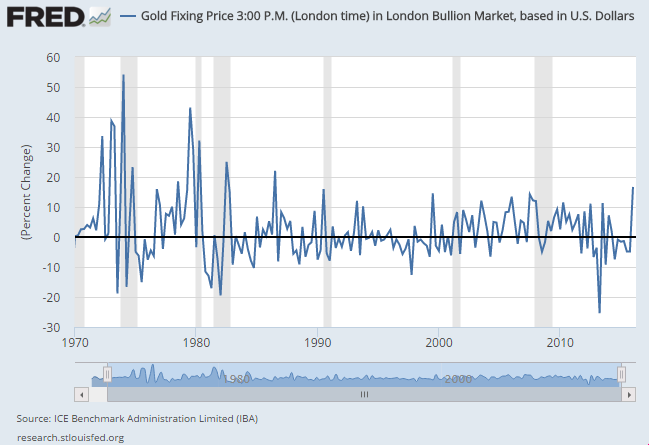 Betting in the futures market today put the odds of "no change" at this month's Fed meeting – to be held in 3 weeks' time – above 95%.
Silver meantime moved in a 10-cent range Monday morning around $15.00 per ounce, having suffered a 4% plunge Friday after the release of solid US jobs data.
Brent crude oil eased back to $38.50 a barrel, extending its drop from Friday following remarks by Saudi Arabia's deputy crown prince doubting a possible deal between major producers to reduce output.
Looking at gold-backed investment trust funds, ETF shareholders "were net sellers last week for the first time in 13 weeks, which could mark a negative swing in sentiment," notes FastMarkets analyst Boris Mikanikrezai.
The giant SPDR Gold Trust (NYSEArca:GLD) last week shed 5 tonnes of the 181 tonnes added so far this year.
Still needing 818 tonnes to back its shares in issue, however, the GLD remains larger than anytime since March 2014.
The iShares Silver Trust (NYSEArca:SLV) has meantime grown 4.6% since New Year, with a rebound in investor interest taking its silver bullion holdings back to end-2014 levels at 10,344 tonnes.
"It is a long time since commodities have been as popular with investors as they have so far this year," says a March report from UK investment and retail bank Barclays.
Meanwhile in Asia today, the Japanese Yen strengthened against the US Dollar for a second day, as its best quarter since 2009 raised concerns about the limits of Tokyo's aggressive monetary easing policy.
The Bank of Japan surprised market participants in January by adopting negative interest rates to curb the currency's rally.
"What the BoJ has done up until now has run into the end of its ability to impact Dollar-Yen," says Sam Tuck, senior currency strategist at ANZ Bank.
"The ability of the BOJ to influence the currency is waning."