END_OF_DOCUMENT_TOKEN_TO_BE_REPLACED

GOLD PRICES rose back above last week's 'crash' close against all major currencies in London trade Tuesday, as a joint statement from G7 finance ministers vowed "timely and effective measures" to offset the economic impact of the coronavirus outbreak, but failed to announce any fiscal or monetary stimulus.
NB: The US Fed then slashed interest rates later today. Please see the update here.
Gold priced in the Dollar rose to $1603 per ounce – a new 7-year high when reached 2 weeks ago – as Western stock markets extended their rally from the worst weekly plunge since the Lehmans Brothers collapse of 2008.
"Closely monitoring the spread" of the novel coronavirus, the US-led Group of 7 major Western finance and central-bank chiefs today said "we reaffirm our commitment to use all appropriate policy tools...[and] stand ready to cooperate further on timely and effective measures."
US President Donald Trump overnight demanded that the Federal Reserve cut interest rates immediately, tweeting how "Australia's central bank cut interest rates and stated it will most likely further ease in order to make up for China's Coronavirus situation and slowdown.
"They reduced to 0.5%, a record low. Other countries are doing the same thing, if not more so."
Gold priced in the Aussie Dollar was little moved after the Reserve Bank became the first major Western central bank to cut rates citing Covid-19, holding 5% below last week's fresh all-time record at A$2561 per ounce. 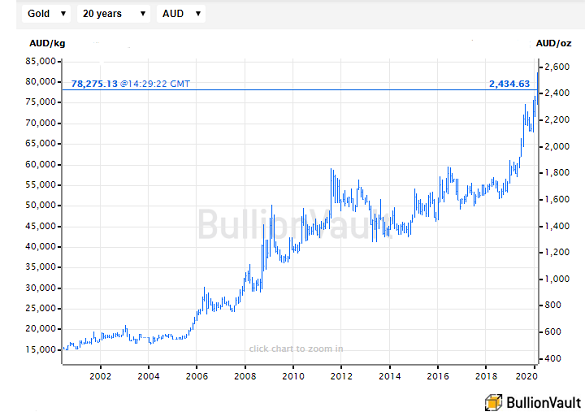 Anticipating today's G7 response to the virus – now claiming over 3,100 deaths, all but 185 of them inside China – Wall Street leapt nearly 5% on Monday, cutting the S&P500's loss from this time last month to 4.9% and helping show a 10.2% gain from start-March 2019.
But the promise to act "falls short of hopes of a coordinated policy response," says UK consultancy Capital Economics, and "raises the risk that central banks will disappoint markets' expectations in the months ahead."
Betting on Federal Reserve policy now sees a 100% chance that the US central bank will slash half-a-point off the cost of borrowing when it meets in a fortnight, up from 0% this time last week.
Monday's big bounce in US equities saw net selling of the giant gold-backed GLD ETF product, down by 0.3% after not seeing any net inflows since 20 February.
Cheaper competitor product the iShares IAU gold ETF fund meantime held unchanged in size, a record high equal to 2/5ths of the GLD's bullion backing.
"The build-up of gold long positions [in gold futures and options] since June 2019," says one London bullion desk in a note, "helped investors protect part of their broader portfolios with consistent gains.
"Hence, when the [stockmarket] correction came, investors started to liquidate those parts of the portfolio with enough gains capitalized to cover margin calls or buy protection for those illiquid parts of their investments."
"It may seem counter-intuitive for gold to fall when other assets are failing," agrees Rhona O'Connell at brokerage INTL FC Stone, "as it is regarded as safe haven."
But gold was "indeed acting as a safe haven" when it sank Friday, O'Connell goes on, because "selling it raises much needed cash for margins when equity markets are falling very sharply.
"There is  a further important technical reason for this; gold settles in t+2, while most equity markets settle in t+3 or more. So when the equity margin calls come in, gold has ready been turned into cash."
Over in the key consumer markets of Asia meantime, premiums for gold on the Shanghai Gold Exchange – over and above London quotes – held at just $1 per ounce on Tuesday, extending the weakest incentives for new bullion imports to China since summer 2018.
Gold bullion imports to India, the metal's No.2 consumer market, last month sank 41% from February 2019 according to Reuters, quoting an un-named government source.
Industrial commodity prices meantime rallied again Tuesday, extending yesterday's bounce from 4-year lows on the Bloomberg Commodity Index.
Crude oil gained 5.0% per barrel of Europe's Brent benchmark ahead of this week's Opec cartel meeting to discuss cutting output further in the face of the coronavirus slowdown in global economic growth.
A major Chinese copper smelter meantime declared force majeure today, voiding supply contracts with buyers because operations have been hit by the virus outbreak.
Over on the currency markets, Sterling today rallied from 4.5-month lows to the Dollar while the Euro eased back from 2-month highs.
That left the Euro gold price at €1442 – a record high when first reached in early January – while gold priced in the British Pound rose to £1253, some £30 per ounce below last month's fresh all-time high.
Telling journalists today that 1-in-5 British workers may become sick with Covid-19, "I'm shaking hands," said UK Prime Minister Boris Johnson when asked about how he's greeting visiting dignitaries.