END_OF_DOCUMENT_TOKEN_TO_BE_REPLACED

GOLD PRICES cut into overnight gains lunchtime Monday in London, writes Steffen Grosshauser at BullionVault, but kept February on track for the sharpest month-on-month rise in Dollar terms since January 2012 as world stockmarkets fell following the G20 meeting of political and central-bank leaders from the world’s biggest economies in Shanghai.
European shares retreated from a three-week high after the G20 meeting failed to propose any coordinated stimulus, merely agreeing at the weekend to use "all policy tools – monetary, fiscal and structural – individually and collectively" to support growth.
"Markets looked at the G20 meeting and found it a tad disappointing, what they had been looking for was a unification of the G20 to do something as a force," said Peter Lowman, CIO of Investment Quorum, a London-based wealth management firm.
Having been sold lower on Friday's US economic data, gold prices were lifted by Chinese traders Monday morning, says the Asian desk of Swiss refiner and finance group MKS.
Over in India – the world's largest consumer market – local gold prices surged 1.4% against the Ruppee on Monday after Finance Minister Arun Jaitley surprised the market by maintaining gold import duty at the current record level of 10%, despite pleas for a reduction from the jewelry industry.
Holding around $1230 per ounce for London settlement, wholesale gold prices have risen more than 10% in February, the largest monthly jump in more than 4 years.
World stock markets, in contrast, headed for their third monthly drop in succession.
"Gold has been the biggest story of this year," says Dan Denbow, portfolio manager at the USAA Precious Metals & Minerals Fund.
"Last summer, people were calling it a barbaric relic, and nobody could care less about gold. Now, it’s slowly generating more and more buying."
New data released Friday showed  speculators in Comex gold futures and options growing their bullish bets and slashing their bearish bets as a group over the week-ending last Tuesday.
That took the "net spec long" position to its second largest since November 2012. 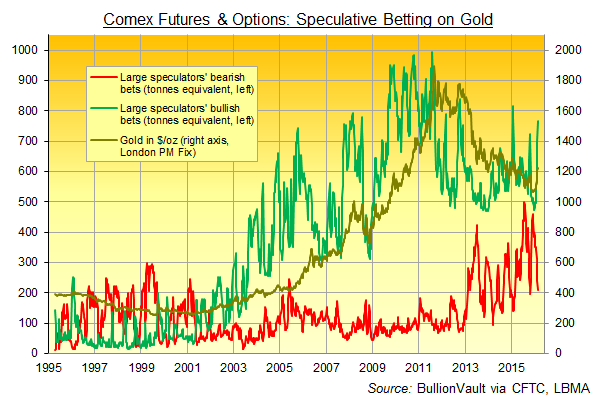 Global holdings in gold-backed trust funds have meantime risen 15% so far in 2016, recovering from the 6-year lows hit as prices fell late in 2015 with the largest quarterly inflows since 2010.
Silver followed gold prices and rose to $14.80 per ounce on Monday morning, after it dropped to a 3-week low of $14.69 last Friday.
However, "the picture certainly looks less rosy for silver, as it is currently sitting at the top end of the falling wedge that it had broken out from two weeks ago," wrote bullion bank Scotia Mocatta in a technical analysis after Friday's close.
"Should silver drift lower and fall back into the wedge next week, we think it could break silver's uptrend and also cast a bad omen for gold."
The Japanese Yen – often seen as a "risk off" asset – was meantime set for its biggest monthly gain since 2008, while China's Yuan fell Monday for the seventh day in a row.
Brent crude oil remained around $32.50 per barrel after it rallied last week on expectations that top producers would cut their output.
Oil prices have now fallen around 70% from their mid-2014 high.