END_OF_DOCUMENT_TOKEN_TO_BE_REPLACED

GOLD PRICES fell for a second session on Monday morning in London, dropping to $1210 per ounce after Chinese markets reopened following the week-long Lunar New Year holiday and European equities rebounded sharply, writes Steffen Grosshauser at BullionVault.
Coming after the weekly biggest gain in more than seven years, gold prices were set for their first back-to-back loss in a month on Monday.
Shanghai traders today returned to find gold priced in Yuan trading 6.4% higher from before China's New Year holiday.
Heavy trading volumes then saw Shanghai's main gold contract drop 2.3%, with the premium above comparable London quotes – typically around $2.50 per ounce – turning into a discount of 70 cents.
"Gold is lower because of the good bounce in equities and the Chinese selling," the Reuters news-wire quotes a Sydney-based trader.
"There is some profit-taking around but volumes [outside China] haven't been huge."
"If financial markets continue to stabilize, gold is likely to correct further," analysts at global financial services provider and London bullion bank HSBC add.
"The last time gold prices rose more than 10% in a 10-day stretch was during the rally when gold touched all-time highs above $1900," notes Swiss refiner MKS PAMP's Asian trading desk in its market update.
Latest data, released Friday, showed money managers trading Comex gold futures and options doubling their "net bullish" position as a group in the week-ending last Tuesday.
Equivalent to 226 tonnes of bullion, however, that measure of bullish bets minus bearish bets remained below two-thirds of the last 10 years' average. 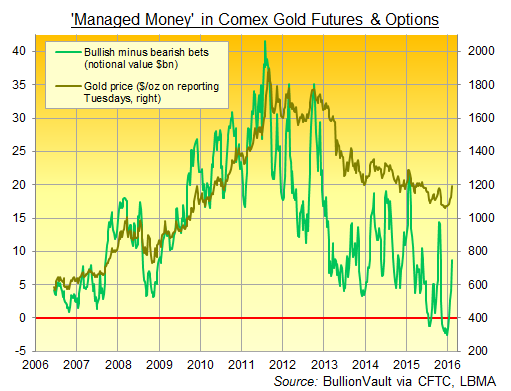 Silver prices tracked gold on Monday, halving last week's 5% gain to drop back to $15.30 per ounce. Silver also had 4 consecutive up-weeks and closed last week higher at $15.75 per ounce.
"Support now lies at $15.00," said Friday's technical analysis from bullion bank ScotiaMocatta.
"We would like a weekly close above $16.35 before feeling confident about calling December's $13.65 as the end of the bear move.
Other precious metals meantime rallied as gold and silver fell, with platinum up $6 to $949 per ounce as crude oil steadied above $30 per barrel following Friday's surge.
European stock markets added almost 3% on average, while the single Euro currency extended its retreat from last week's new 4-month highs against the Dollar to nearly 3 cents at $1.1177.
"I don't think we're in the middle of a sustained [gold] bull market," says David Govett, head of precious metals at London-based broker Marex Spectron, speaking to the Financial Times.
"The higher it goes the more it has to run out of steam at some point. It only takes a couple of positive economic figures to switch that mentality around and everyone jumps out of the lifeboat."