END_OF_DOCUMENT_TOKEN_TO_BE_REPLACED

GOLD PRICES steadied Monday at the sudden multi-month highs reached in most major currencies following last week's US inflation data as monetary stimulus and liquidity continued to swell the Federal Reserve's balance sheet, set to hit $9 trillion next year even after it announced the start of QE tapering, writes Atsuko Whitehouse at BullionVault.
Spot gold prices edged higher by 0.2% to $1868 per ounce today, extended its biggest weekly gain since May and hitting fresh 5-month highs for US Dollar traders.
"The renewed commitment from the Fed to support the economy while letting inflation print higher lead us to revise up our [gold price] forecast," said strategists at Société Général.
"We now expect price to average $1950 in 1Q '22."
"We need to take it very seriously," said Federal Reserve Bank of Minneapolis President Neel Kashkari on Sunday, answering to a question about elevated inflation.
"But my view is we also need to not overreact to some of these temporary factors even though the pain is real."
"It's important to realize that the cause of this inflation is the pandemic," said Treasury Secretary Janet Yellen yesterday when she was asked about inflation amid a slump in President Biden's voter approval rating and Democrat Party wrangling over his big-spending economic agenda.
The Consumer Price Index increased 6.2% in the 12 months to October according to Labor Department data released last week, the fastest annual pace since late-1990.
The 10-year break-even rate, an indication of the bond markets' inflation expectations over the next decade, steadied at 2.72% Monday morning after jumping to 2.73% on Friday, very nearly matching the data series' 2006 highs. 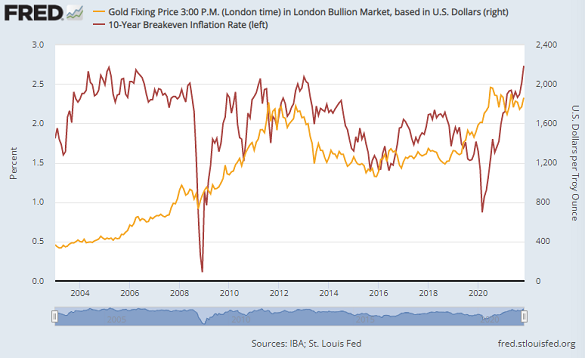 "As more stimulus and liquidity comes out of the [Federal Reserve] and Washington," reckons Adam Koos of financial advisors Libertas Wealth Management Group, "we could see this short-term uptrend quickly change course at any time, sending the Dollar falling, which would create a catalyst for gold prices."
The US Dollar index, which measures the currency against six peers, edged lower Monday morning after hitting 16-month high last week and recording its strongest week in almost five months.
The Federal Reserve announced earlier this month that it is beginning to scale back its massive $120 billion monthly bond-buying programme, with purchases reduced $15 billion each month until the program ends in May.
Even with slowing the rate of Quantitative Easing purchases, the Fed's balance sheet still sets to hit $9 trillion next year and the amount of QE since the start of the pandemic will have amounted to $4.8 trillion. 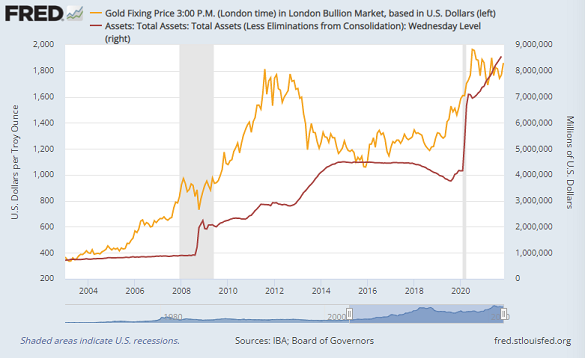 The White House announced last Wednesday that President Joe Biden will on Monday sign into law the largest federal investment in infrastructure in more than a decade.
Biden will be joined in a signing ceremony by members of Congress who helped write the $1 trillion piece of legislation to improve the nation's roads, bridges and waterways.
He will also meet online with China's President Xi as tensions worsen over Taiwan, trade, climate change and human rights.
The President's overall approval rating is now at 41%, down from 50% in June and 44% in September, according to a Washington Post-ABC News poll.
About half of Americans overall blame Biden for accelerating inflation, the poll showed.
US consumer sentiment has meantime weakened to its lowest level in a decade, according to a data published by the University of Michigan last Friday.
The decline in sentiment this month came amid "an escalating inflation rate and the growing belief among consumers that no effective policies have yet been developed to reduce the damage from surging inflation," said Richard Curtin, chief economist of the university's consumer surveys.
European gold prices meantime edged higher by 0.2% to €1632 per ounce on Monday, extending last week's 3.7% with a new 1-year high.
Having risen 3.3% for UK investors to hit the highest since January, gold bullion prices today traded almost flat at £1390 per ounce.
Today's benchmark price on the Shanghai Gold Exchange – the only legal route for refined bullion into mainland China, the metal's No. 1 consumer market – steadied at ¥380 per gram, the 5-month high recorded last week.
That crushed the premium for bullion landed in China, over and above the global reference price of London settlement, from last week's average of $2.20 to a discount of $0.70 per ounce on Monday.
The average for this year is a premium of $4.60, reversing last year's record Covid discounts but still contrasting with the average $9 incentive for new imports typically seen before the Coronavirus pandemic.