END_OF_DOCUMENT_TOKEN_TO_BE_REPLACED

GOLD PRICES touched fresh 8-year highs for US Dollar investors near $1780 per ounce in London trade Wednesday as long-term interest rates fell with world stock markets on another surge in new cases of Covid-19 and the United States moved to impose new trade tariffs on goods coming from Europe and Canada.
"[While] China appears to have tamed a new outbreak of the virus in Beijing," says ABC News, "new coronavirus cases in the US have surged to their highest level in two months and are now back to where they were at the height of the outbreak."
The US Trade Representative to the World Trade Organization is meantime looking to impose new or higher tariffs on European and UK exports including olives, beer, aircrafts and cheese according to a statement posted late Tuesday.
Washington also wants to re-impose aluminum tariffs on northern neighbor Canada, barely 2 weeks before the new Nafta free-trade agreement comes into force.
Gold's strong gains in London bullion quotes saw prices in China – the metal's No.1 consumer market – widen their discount to more than $20 per ounce overnight, reflecting weak local demand versus supply.
New York premiums in contrast, over and above physical bullion quotes in London, today widened to $20 per ounce, extending the price dislocation spurred by the UK imposing lockdown in late March, when traders in Comex futures mis-read the secure logistics industry's capability to move metal across the Atlantic.
Gold stockpiles in Comex warehouses in and around New York have more than quadrupled to a record 970 tonnes.
"The [physical] market has not only remained open for business, but also very active," says an update from wholesale trade body the London Bullion Market Association, "with record highs recorded for market volume and metal stocks."
Wednesday morning's reference auction in London found spot bullion trading at $1776 per ounce, still 6.3% below gold's all-time Dollar peak of September 2011.
Gold in Euro terms in contrast held just 2.1% below last month's fresh benchmark high of €1625 per ounce, and the UK gold price in Pounds per ounce was only 2.1% below its May 2020 top.
Trading at £1420, gold in Sterling now costs more than 50% above the last 10 years' benchmark average.
Euro gold today stood 38.8% above its 10-year average, while the Dollar price was 29.6% higher. 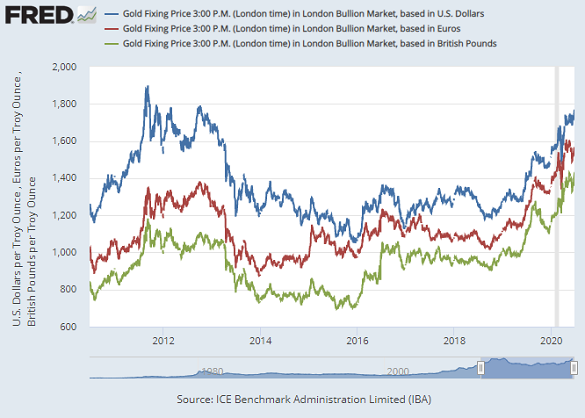 Tuesday's action in gold ETFs meantime showed investors in bullion-backed trust fund products split over the metal's immediate outlook however, with some expanding as others shrank on profit-taking.
The giant SPDR Gold Trust (NYSEArca: GLD) has so far this week expanded to need an extra 9.9 tonnes of bullion backing at 1,169 tonnes – the most since 11 April 2013, eve of that spring's Trillion Dollar Gold Crash.
But cheaper and smaller competitor the iShares product (NYSEArca: IAU) yesterday lost more than it added on Monday, shrinking for the first time in almost 3 weeks to need 450 tonnes.
The No.1 provider of allocated gold to private investor ownership, BullionVault has also seen net selling on this week's price rise, with profit-taking spurring a net outflow so far of 5 Good Delivery bars (61.4kg) from the London vault, cutting total client holdings across the 5 global locations offered to 43.6 tonnes.
That still keeps user holdings 11.7% larger in 2020 so far after net gold demand set a new 3-month record on BullionVault in March to May.