END_OF_DOCUMENT_TOKEN_TO_BE_REPLACED

GOLD PRICES jumped on Monday to $1180 per ounce – the 2013 crash low – reaching new 3-month highs as world stock markets sank over 2% to mark the start of the Chinese New Year, writes Steffen Grosshauser at BullionVault.
With China and many regional Asian markets closed for the week-long New Year's holiday, gold priced in Dollars initially slipped $10 overnight from Friday's finish near $1174 – its highest weekly close since October.
But gold then surged as London dealing began, extending last week's 5% rally – its best weekly performance since July 2013 – to trade more than 11% higher from New Year's Day in January.
Spring 2013 had seen gold's worst quarterly slump in three decades, cutting Dollar prices by more than 25% between April and end-June to reach $1180 – a level then touched again at the end of December that year. 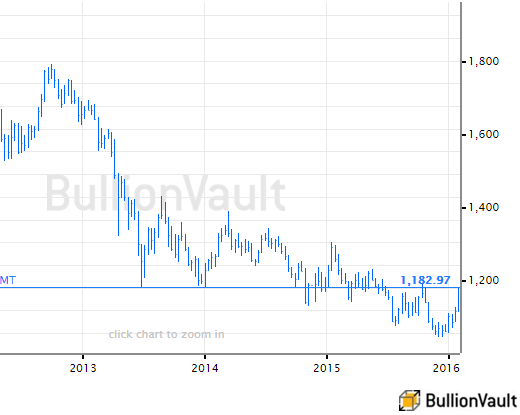 "[Investors] have been coming back to gold," Bloomberg quotes Jeff Sica, president of Circle Squared Alternative Investments in New Jersey, blaming "a greater likelihood of more economic turmoil not only here [in the US] but in Europe."
Besides the "improving macro picture" for gold, says US brokerage INTL FCStone's Ed Meir, "The most obvious tailwind is the improving technical picture, where prices took out [January's] double-top resistance at $1110, paving the way for a mini-breakout on the charts."
"The higher prices go," says London broker Marex Spectron's David Govett, "the more they attract investor demand, ETF demand and spec[ulative] buying.
"I and many others have tried to stand in the way of this rally [since New Year's Day] too many times and have been proved wrong."
The quantity of gold bullion needed to back shares in the SPDR Gold Trust (NYSEArca:GLD) – the world's largest ETF by value at its 2011 peak, overtaking the stockmarket SPY – rose yet again Friday to reach its largest level since mid-October as investor demand saw the number of shares in issue grow another 0.7% on the day.
Using Comex futures and options, hedge funds and other money managers raised their bullish betting on gold price gains – net of bearish bets as a group – to a three-month high in the week-ending last Tuesday, latest data from US regulator the Commodity Futures Trading Commission said after Friday's close.
Swelling 4% as bearish bets shrank 10%, however, the number of bullish contracts held by the Managed Money category remained at less than three-quarters its average size of the last decade.
The number of bearish bets that gold prices will fall, in contrast, currently stand near 2.5 times their 10-year average. 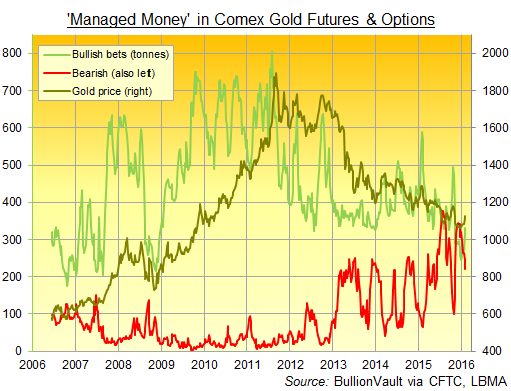 Silver tracked gold prices higher to mark the Chinese New Year on Monday, rising above $15 per ounce for the first time since early November.
Unlike gold, however, the large iShares Silver Trust (NYSEArca:SLV) saw its holdings drop last week as investors cancelled shares.
'Managed money' traders in US Comex futures and options also grew their bearish betting faster than bullish contracts on last week's data.
That capped the overall "net bullish position" of speculative money managers just below the previous week's 3-month high, and holding some 27% larger than the last 10 years' average.