END_OF_DOCUMENT_TOKEN_TO_BE_REPLACED

GOLD PRICES started the trading week edging above $1090 per ounce on Monday morning in London, writes Steffen Grosshauser at BullionVault, while Asian stocks outside China slipped to their lowest level since 2011 and Brent crude fell to new 12-year lows beneath $28 a barrel as Iran prepared to export more oil following the end of Western sanctions over its nuclear program.
European equities traded higher, however, with Britain's FTSE 100 up by 0.3% and Germany's Dax gaining 0.6% from last week's sharp losses.
China’s central bank took another step to fight downward pressure on its Yuan, announcing it is raising the reserve ratio for offshore banks offering clearing services for the currency.
China's official GDP estimate for the last 3 months of 2015 is due out Tuesday.
"The way [these] steep equity price falls…is playing out is supporting gold and is more supportive of bullion than previous bouts of risk-off action,” wrote global bank and London bullion market-maker HSBC in a note on Friday.
The gold price in US Dollars today extended its rise for 2016 so far to 2.8%. But profit-taking by investors – plus selling by mining producers – around $1,095 per ounce could keep a lid on further gains, said refining and finance group MKS's Asian trading desk on Monday morning.
"With New York on holiday [Monday for Martin Luther King Day] we are unlikely to see the market move through this level."
Silver prices also held firm on Monday, rising to $13.95 per ounce.
Platinum, in contrast, touched fresh 7-year lows at $817 per ounce, again widening its discount to the gold price to new all-time records.
Looking at the Comex derivatives market, latest positioning data from US regulator the CFTC, taken last Tuesday, show the 'Managed Money' category of traders turning bullish as a group overall on gold futures and options for the first time in 9 weeks.
Small speculators, in contrast, continued to hold more bearish than bullish bets as a group, extending the 'Non-Reportable' category's net negative position to 20 of the last 26 weeks. 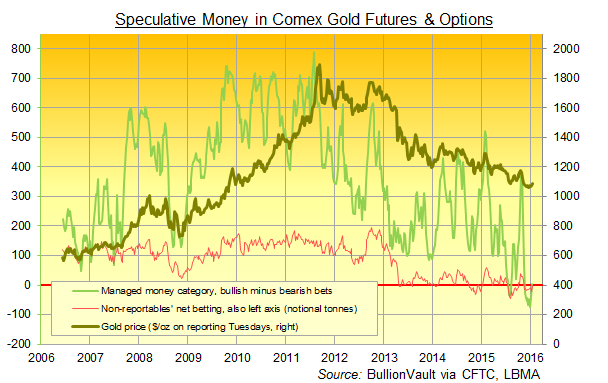 Brent oil meantime fell as low as $27.67 a barrel on Monday, its lowest since 2003, "due to the Western sanctions on Iran being lifted," according to Singapore analyst Daniel Ang at Phillip Futures.
The decision to lift the financial and economic sanctions imposed in 2012 against Iran, formerly the Opec oil cartel’s second-biggest producer, came on Sunday after the international nuclear watchdog, the IAEA, said Iran had complied with a deal that should prevent its development of nuclear weapons.
Around half a million barrels per day of extra crude oil could now reach world markets, according to analysts.