END_OF_DOCUMENT_TOKEN_TO_BE_REPLACED

GOLD PRICES spiked Monday, rallying after speculators cut their bullish Comex bets but gold ETFs continued to expand as European stock markets cut earlier gains amid fresh Russian attacks on Ukraine's capital Kyiv, writes Atsuko Whitehouse at BullionVault.
With the war in Ukraine nearing the 1-month mark with no ceasefire or conclusion in sight, gold prices in US Dollar terms rose to $1935 per ounce after dipping below $1920 on Monday morning.
Wholesale bullion in the spot market also rose for UK and Euro investors, reaching £1465 and €1750 respectively.
Latest data show that hedge funds and other leveraged speculators in Comex gold futures and options cut their bullish betting by13% on gold as a group in the week-ending 15th March and grew their bearish betting by 2%.
Overall, that shrunk the net long position of Managed Money traders by 16% to the smallest since mid-February, just before Russia’s invasion of Ukraine began.
"Long liquidation from leveraged funds who had loaded up on gold futures in recent weeks may have run its course," reckons derivatives platform Saxo Bank's commodity strategy team, "while longer-term focused investors have been continuing buyers of gold ETFs since the war began."
Gold-backed ETF trust funds continued to expand last week, as the giant SPDR Gold Trust (NYSEArca: GLD) and the world’s next largest iShares gold ETF (NYSEArca: IAU) saw net investor inflows for the 6th and 3rd consecutive week. 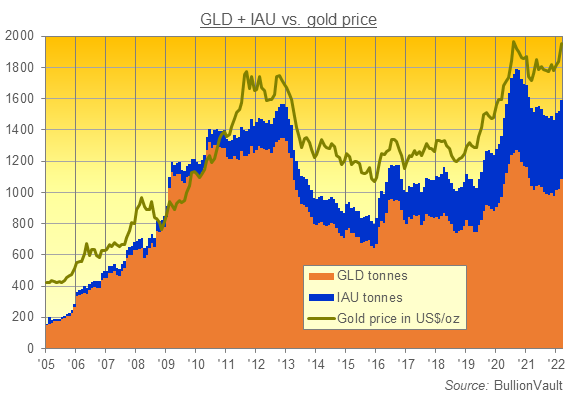 Investor inflows to both gold ETFs since the start of the war in Ukraine three weeks ago have seen their growing shares in issue need an additional 67 tonnes of bullion backing, expanding their aggregate holdings to 1,594 tonnes, the biggest since March 2021.
On day 26 of the Russian invasion, Ukraine on Monday rejected a Russian demand for the southern city of Mariupol to surrender by 5am Moscow time as part of a "humanitarian corridor" offer.
Ten million people – more than quarter of Ukraine's total population – have now fled their homes.
Oil prices meantime surged for a third day, taking Brent crude 14% higher since Wednesday, as the European Union was reported to be considering a Russian oil embargo this week.
US President Joe Biden is due in the region for Nato, Group of 7 and EU summits, aiming to agree more steps against Moscow.
Aluminium prices jumped as much as 5.1% on Monday after Australia announced an immediate ban on alumina exports to Russia yesterday.
Russia accounts for about 6% of global supply of aluminium and Australia supplies almost 20% of Russia’s alumina, the key ingredient for producing the industrially useful metal.
The price of palladium – of which Russia accounts for 40% of the world’s total mine production – today rose 1.5% to $2529 per ounce but still held 26% below the recent peak at $3,444 at the beginning of March.
Prices for silver, which finds nearly 60% of its annual demand from industrial uses, edged higher by 0.2% to $25.03 per ounce.
Platinum, which finds two-thirds of its demand from industrial uses led by auto-catalysts, rose 0.2% to $1029 per ounce.
“This renewed safe haven buying in the form of ETFs and physical investment demand will keep prices elevated so long as the Fed does not drastically hike real rates into positive territory,” said Swiss refining and finance group MKS Pamp in their recently revised 2022 precious metals forecast.
The real interest rate implied by inflation-protected 10-year TIPS bonds steadied at minus 0.70% on Monday after rising to minus 0.60% just after the Federal Open Market Committee raised its key Fed Funds rate by 25 basis points at its meeting last Wednesday.
That suggests debt traders expect the underlying cost of living to rise faster.
Longer-term interest rates rose again Monday, with the 2-year Treasury note offering more than 2% per annum for the first time since May 2019, while the 10-year Treasury bond offered 2.23%.
That kept the spread between the 10 and 2-year yield at its narrowest level since February 2020.
A yield curve inversion of the 2-year versus 10-year rate is viewed as a reliable signal that a recession is likely to follow in one to two years.