END_OF_DOCUMENT_TOKEN_TO_BE_REPLACED

SILVER PRICES slipped from yesterday's 3-week highs but held firmer than gold to bounce back above $17 per ounce on Wednesday ahead of the release of minutes from the US Federal Reserve's latest interest-rate meeting.
Physical gold bullion dipped to bounce $4 higher from $1250 per ounce as world stockmarkets held flat with major government bond prices.
Crude prices held firm ahead of Thursday's Opec oil cartel meeting on output cuts in Vienna, but other commodities also slipped as silver prices retreated over 40 cents from yesterday's top at $17.31 per ounce.
That pulled the Gold/Silver Ratio of the dearer precious metal's price relative to silver further down from last week's 11-month highs above 75 to below 73.5 at this morning's London benchmarkings.
"Gold has fallen...because rate hike expectations are rising," says German financial services group Commerzbank's commodities team.
"According to the Fed Fund Futures, the probability of a Fed rate hike in June is back at a good 80%."
Those odds stood below 65% only last week according to betting on June interest-rate futures.
With global Dollar quotes for London settlement almost $15 lower per ounce from the same time Tuesday, the Shanghai afternoon gold price benchmark today fixed at ¥278 per gram, some 1% below yesterday's 3-week high.
That widened the premium, however, for bullion delivered in China, offering new imports an incentive of $8.50 against yesterday's 1-month low of $7.80 per ounce.
Swiss exports of gold directly to China "nearly tripled year-on-year" in April to more than 40 tonnes, Commerzbank also notes, while exports to Hong Kong – the former key conduit for metal into what is now the No.1 consumer nation – held at a "very low level" beneath 13 tonnes.
"At the same time, China imported large amounts of silver in April," Commerzbank says, with Chinese customs data reporting a near-25% jump from the same month in 2016 to 298 tonnes.
Looking at silver prices, "$17 looms as a pivot point for the metal," says an Asian trading note from Swiss refiners and finance group MKS Pamp, "with solid upside potential should the figure hold."
"I am bullish as long as silver closes above the 400-day moving average [at] $16.91," said technical strategist Russell Browne at Canada's Scotiabank in New York overnight – the level which silver prices fell to and bounced from Wednesday. 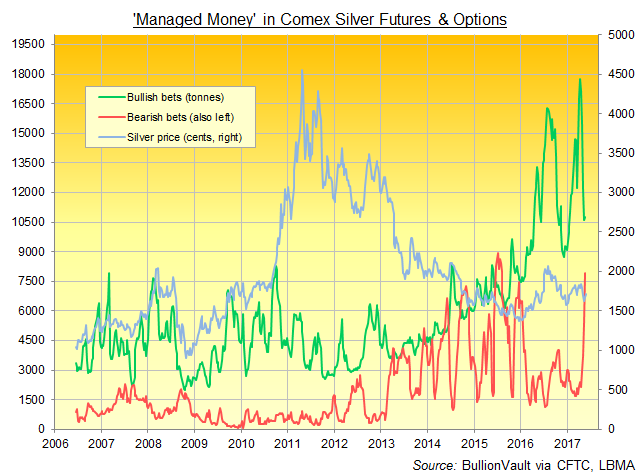 Hedge funds and other speculative traders as of Tuesday last week held more bearish bets against silver prices than any time outside the summer 2015 peak according to positioning data collected by US regulators covering the Comex silver futures and options market.
Counted against the same 'Managed Money' category's bullish bets, that helped create its smallest net long position overall since mid-January 2016, back when silver prices began recovering from their lowest level in more than 6 years beneath $13.80 per ounce.
Both gross and net bullish betting on silver prices set fresh all-time highs only 6 weeks ago, in mid-April.
Yesterday saw the giant iShares Silver Trust (NYSEArca:SLV) hold unchanged in size as prices peaked above 3-week highs at $17.30 per ounce.
The SPDR Gold Trust (NYSEArca:GLD) in contrast shed 5 tonnes of gold from the bullion backing its value, taking it down to 847 tonnes – equal to 26% of annual world mining production – as shareholders liquidated 0.6% of the giant gold ETF.
Silver prices "found support [in early May] near $16.00," says the technical analysis team at French investment and bullion market-making bank Societe Generale, but now "a move beyond $17.06/17.37 is needed for a larger recovery."