END_OF_DOCUMENT_TOKEN_TO_BE_REPLACED

GOLD PRICES fell against a rising US Dollar in London trade Friday, hitting a 6-week low and heading for the lowest weekly finish since April as long-term interest rates rose to multi-month highs across the Western world following this week's forecast of less QE stimulus and higher short-term interest rates from the US Federal Reserve.
Non-voting member Loretta Mester of the Cleveland Fed said today that she supports tapering the current $120bn per month of bond purchases from November.
Energy prices rose again, taking Brent crude oil above $77 per barrel – a near 3-year high – as the UK government urged motorists to avoid panic buying amid reports of filling-station shortages.
The UK may also impose energy-price caps "to protect consumers" against record-high European gas and electricity costs, a junior minister said Thursday.
Police in Bulgaria have raided the country's Energy and Water Regulatory Commission, which licenses electricity and gas traders, after business organisations filed a complaint over surging prices, already doubling in the year to August.
European stock markets today lost 0.5%, erasing most of the weekly gains enjoyed after bouncing from Monday's 2-month low.
Down 0.8% from last Friday, the Dollar price of gold first reached the current $1740 level on the way up in August 2011, not regaining it after the 'taper tantrum' crash of 2013 until spring 2020's Covid Crisis.
"Taper is less of a threat this time around," says new analysis from bullion refiners MKS Pamp's New York strategist Nicky Shiels.
"Lower real rates for longer will continue to ensure precious metals remain supported...[and] markets [show] acceptance that tapering is not tightening."
But government bond prices again fell across the board on Friday, extending the rise in borrowing costs since Wednesday's US Fed comments that it will "soon" start reducing the pace of new QE asset purchases.
Conventional 10-year US Treasury yields today reached 1.45%, up from 1.31% on Monday's stock-market dive, while the yield on inflation-protected TIPS reached minus 0.88%, also its highest since 1 July.
Gold prices tended across the last decade to show a strong inverse correlation with the real rate implied by 10-year TIPS.
After that relationship broke down to its weakest in 2 years this summer, as TIPS yields set fresh all-time lows but gold prices failed to rise, it has now strengthened again as real interest rates rise. 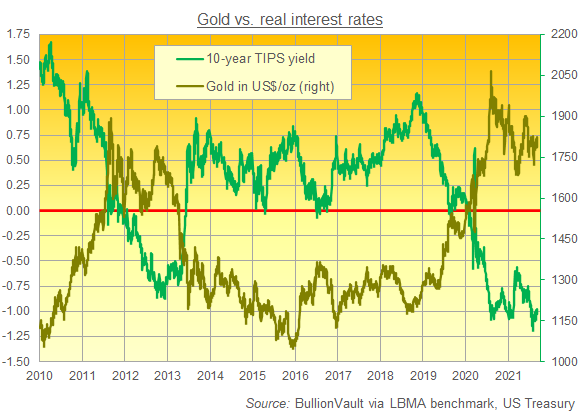 Silver had earlier tracked and extended the drop in gold prices, setting its lowest Friday benchmark in the London bullion market since 25 September last year at $22.65 per ounce at midday.
Silver prices then slid back towards Monday's 'Evergrande slump' low just above $22 in spot trade.
So-called cryptocurrencies also fell Friday, with Bitcoin losing 5% and Ethereum down 7% – called a "crash" by some pundits – after 10 of China's regulatory bodies, including the central bank, announced a blanket ban on all trading and transactions in those digital assets.
Both Bitcoin and Ethereum have fallen harder than this on 2 previous days this month.
"It is wise to add Bitcoin to an investment portfolio," claims a column in today's edition of The Economist magazine, calling it "a Nobel prize-winning diversification strategy."
New data yesterday said US business activity across manufacturing and the services sector is growing at its slowest pace in a year so far this month.
IHS Markit's composite PMI index for September also showed its weakest Eurozone growth for 5 months on yesterday's preliminary reading, and "looks likely to weaken further in coming months if the price and supply headwinds show no signs of abating."
"Eerie silence as Evergrande misses payment deadline," says the UK's Guardian newspaper, with the debt-laden Chinese property giant – whose likely default on interest payments sparked Monday's steep losses in global financial markets – now entering a 30-day grace period with its domestic creditors as " officials look to limit unrest and job losses."
China's domestic sales of construction diggers had already fallen over 9% per year in July, a drop worsening to 31.7% in August.