END_OF_DOCUMENT_TOKEN_TO_BE_REPLACED

GOLD and SILVER PRICES fell together with bonds and Western stock markets on Tuesday, testing new 6-week and 9-month lows respectively against a rising US Dollar after the major US bullion ETFs all shrank and as the latest surge in energy prices saw longer-term interest rates rise again.
The EuroStoxx 600 index fell 1.5%, dropping for the 3rd session running, as electricity and natural gas prices in Europe jumped to yet more all-time highs.
Northwest European coal touched the highest since before the 2008 financial crisis.
Brent crude, the region's benchmark oil price, today touched $80 per barrel – a 3-year high that's twice the price of this time in 2020. 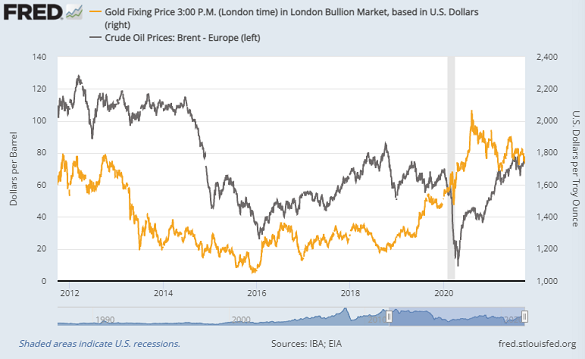 "This is the first innings of a multiyear, potentially decade-long commodity supercycle," reckons Jeff Currie, head of commodities analysis at US investment bank Goldman Sachs.
"It's driven by the war on climate change, the war on income inequality. All of these dynamics lead to a structural rise in commodity demand against this whole idea of the revenge of the old economy."
Despite the rise in energy costs, most other commodities fell Tuesday, with copper losing 0.5% to trade 1/10th below May's all-time high while corn and wheat edged 0.2% lower.
Finding over half its end-demand from industrial uses silver lost as much as 2.3% from yesterday's 2-session high, touching $22.11 per ounce for the 2nd time in a week – the precious metal's cheapest price of 2021 so far.
Gold priced in Dollars also fell further, dropping below $1728 for the first time since 11 August, after Monday saw the New York-listed GLD and IAU gold-backed ETFs both shrink, losing 0.3% and 0.2% of their shares in issue respectively on light liquidation by investors.
The giant SLV silver ETF shrank by 0.7%, its fastest liquidation since mid-July.
Fresh falls in bond prices Tuesday drove borrowing costs sharply higher once more for governments everywhere, taking 10-year US Treasury yields up to 1.54% for the first time since mid-June and pushing Germany's still negative 10-year Bund yield up within 0.2 percentage points of zero.
Euro gold prices bounced off €1480 – also the cheapest since mid-August – for the 2nd time in 4 sessions.
Germany's Green Party look certain to help form a coalition government in Berlin after coming 3rd in Sunday's federal elections.
The UK gold price in Pounds per ounce meantime showed a small rise for the week so far on Tuesday, trading above £1280 despite 10-year Gilt yields hitting 1.0% for the first time since May 2019 as Sterling sank on the FX market amid continued chaos in the UK's haulage supply chains.
With a "shortage" of 100,000 heavy-goods vehicle drivers nationwide, the Government of Boris Johnson today said it has put 75 military drivers "on standby" to help deliver fuel – the 18th separate "measure" according to one minister aimed at tackling empty gas stations across the country – less than 24 hours after another Cabinet minister said there were no such plans.
" Fights broke out at some English petrol stations as drivers jostled for fuel," says Reuters, "and pictures on social media showed some people filling up old water bottles with fuel."
The number of vehicles visiting UK petrol stations rose 5-fold Sunday from its normal level after the government urged against 'panic buying'.
Insurance company the RAC said it saw 2 weeks' worth of breakdowns in a single day as members ran out of fuel.

I have never seen a large economy like Europe (UK+EU) sleep walking into an energy crunch (maybe let's call it a crisis since major industrial companies are having to shut down) and no a single politician appears to give a damn about it. Incredible.

Lumber prices in Germany have "risen by up to 700% in the past year," says FAZ, an "existential crisis" for some wood-working businesses which is also driving the cost of new housing higher even ahead of Russia's export ban on softwood logs announced for 1 January, 2022.

Amid the continuing US-Russian row over Russia-Europe's Nordstream 2 pipeline, "The big bounce in Russian gas production in 2021 has proven to be insufficient to meet the simultaneous spikes in demand at home and abroad" following the relaxation of Covid restrictions and the need to refill storage facilities, says the Oxford Institute for Energy Studies.
"Russian gas output has risen robustly and has [already] been close to its maximum productive capacities. [Meeting demand] requires time, money, and contractual assurances of offtake."