END_OF_DOCUMENT_TOKEN_TO_BE_REPLACED

GOLD and SILVER PRICES both continued their bounce from multi-month lows in London trade Tuesday, rallying ahead of tomorrow's Federal Reserve announcement on QE tapering as China's Evergrande debt scandal deepened but world stock markets snapped their worst stretch of losing days since early 2020's Covid Crash.
One day ahead of the US Fed's much-anticipated September policy statement and forecasts, gold prices extended their rally from yesterday morning's new 6-week low, reaching $1770 per ounce as silver also rose back above last weekend's level.
That had already marked the lowest Friday finish in 5 and 12 months respectively for gold and silver.
With China's bullion trading shut until tomorrow for the Mid-Autumn Festival, silver prices sank to just above $22 per ounce in Asian trade Monday, the cheapest since end-November last year, shortly after Pfizer's vaccine announcement saw precious metals dive from their Covid Crisis peaks.
Silver today traded 60 cents above that low, while gold priced in the Dollar extended its rebound to $30 per ounce at $1772.
"[China's] week-long National Holiday starts on 1st October," notes precious-metals specialist Rhona O'Connell at brokers StoneX.
So "ordinarily we should expect some bargain hunting into a fall like this, but the Asian markets remain very quiet." 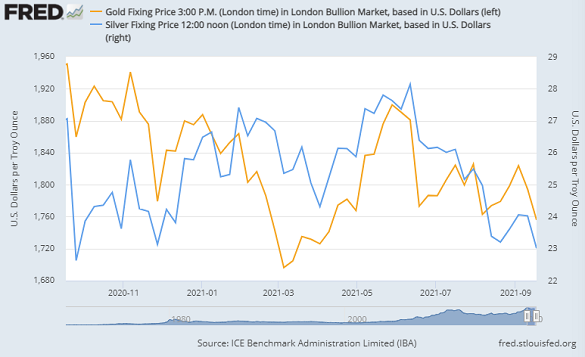 "Over and above that," O'Connell adds, "the markets are now having to cope with the crisis at Evergrande."
Monday's escalation of the giant Chinese property developer and business conglomerate's "likely" debt default saw global stock markets fall 1.6% on the MSCI World Index.
"Evergrande is not a Lehman Brothers moment," says an opinion column in today's South China Morning Post, rejecting widespread forecasts of panic and contagion across the world No.2 economy, "but its fate spells trouble for long-term growth."
Besieged by angry home buyers and financial customers on social media, CEO Xu Jiayin today sent all employees a letter thanking them for their hard work and paying tribute to their families, while vowing that his company – now down 85% on the Hong Kong stock market since February – will "get out of this darkest moment as soon as possible."
Now struggling to repay or service US$305bn worth of debt, Evergrande apparently told staff earlier this year to lend it money or lose any hope earning a bonus, and another Evergrande executive today blamed front-line sales staff for mis-selling complex 'wealth management products' to ordinary savers.
"Proceeds from the WMPs have been used to bridge various funding gaps faced by the parent company," he said, according to the Financial Times, and "some WMP proceeds were used to repay previous products" – a 'model' which became unsustainable when new sales then plummetted.
"Many people might [now] be arrested for financial fraud if investors don't get paid off," he went on.
"Our products were not for everyone. But our grassroots salespeople didn’t consider this when making their sales pitches, and they targeted everyone in order to meet their own sales targets."
The Hang Seng share index today rallied 0.5% from yesterday's new 2021 low, and European bourses reversed most of Monday's slump.
But having set 55 new record-high closes in 2021 across 174 trading days to 6th September, the MSCI World Index has now fallen in 8 of the last 10 sessions.
That's the heaviest such stretch since the Covid Crash of February-March 2020.
Platinum joined gold and silver prices in rallying further on Tuesday, regaining last week's finish at $943 per ounce after sinking with fellow autocatalyst metal palladium amid yesterday's Evergrande slump in global markets.