END_OF_DOCUMENT_TOKEN_TO_BE_REPLACED

UPDATE 17:15 GMT -  GOLD BULLION slumped to 4-week lows against a rising Dollar late Tuesday in London, erasing an earlier spike after Fed chairman Jerome Powell said high inflation and a strong economy mean the US central bank could accelerate its QE tapering, spurring expectations that interest rates will be raised sooner from zero.
Gold bullion spiked to $1808 before sinking $30 inside 40 minutes and then slipping to the lowest since 4 November. 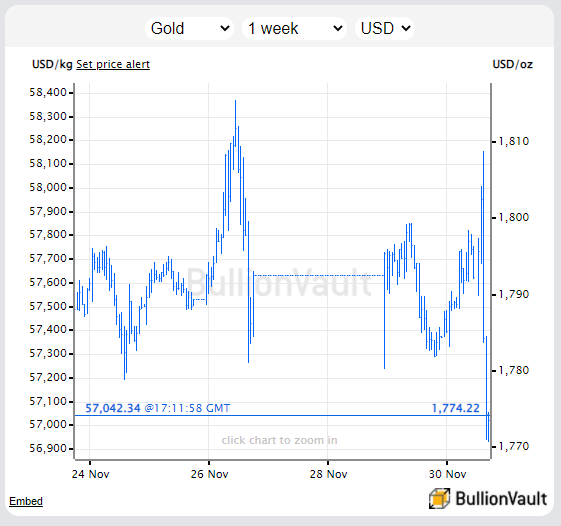 Silver prices also whipped violently against the volatile Dollar as the Fed chair spoke, touching $23.30 before losing 60 cents per ounce to the lowest since mid-October.
That move edged the Gold/Silver Ratio back below 78 after the relative measure of the 2 precious metals' prices touched the highest since September earlier on Tuesday.
"The word transitory has different meanings to different people," the Federal Reserve boss went on, giving scheduled testimony about monetary policy to Congress.
"To many it carries a sense of shortlived. We tend to use it to mean that it won't leave a permanent mark in the form of higher inflation.
"I think it's probably a good time to retire that word and try to explain more clearly what we mean."
US stock markets sank 2.0% meantime, extending a wider drop in global equities as fears over the Omicron variant of Covid worsened.
EARLIER REPORT 14:15 GMT - GOLD BULLION held firm against most major currencies on Tuesday morning, escaping another sharp fall in silver prices, world stock markets and industrial commodities after the head of vaccine-maker Moderna said the new Omicron variant of Covid-19 appears to be "highly infectious" and that the efficacy of vaccines – "all of them" – is likely to be weaker.
Asian and European equities fell hard, erasing Monday's 0.8% bounce from Friday's slump to 6-week lows in the MSCI World Index.
Crude oil prices also fell steeply, hitting 12-week lows with US benchmark WTI slumping over 3% to trade below $68 per barrel.
That was a 2.5-year high when reached on the way up in June.
With global travel restrictions tightening fast as new cases of Omicron are confirmed, the price of platinum – primarily used in diesel-engine autocatalysts – meantime touched their lowest since mid-September at $943.
Silver on Tuesday rallied 14 cents to $22.90 from an overnight low but held near its cheapest in 7 weeks.
Wholesale gold bullion bars in contrast edged up to $1796 per ounce for US Dollar investors, pushing the Gold/Silver Ratio of the 2 formerly monetary metals' relative prices up above 78 for the first time since late September.
Having already averaged more than 80 ounces of silver to one ounce of gold across 2017-2019, that ratio hit a quarter-century peak even before news of the Covid pandemic broke in Wuhan, China.
The ratio of gold to silver prices then leapt to new all-time records above 100, beating its Great Depression highs of the 1930s and early WW2, when the Covid Crash struck global financial and industrial markets in early 2020. 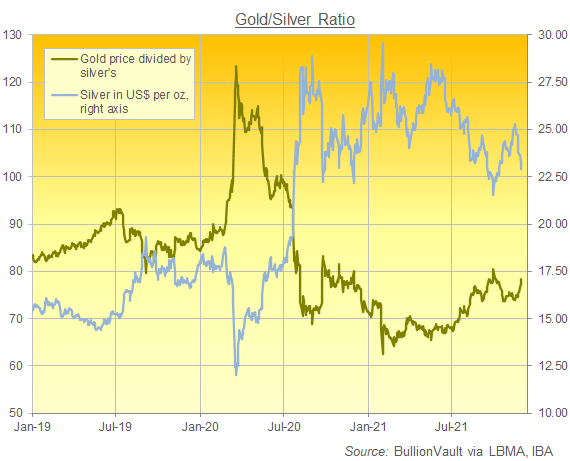 "Given the uncertainty around whether this new variant is more dangerous than the Delta variant, gold's downside should be protected," reckons Harshal Barot at specialist consultancy Metals Focus, predicting a near-term range of $1780 to $1830.
When bad Covid news hits, says a note from Nicky Shiels at Swiss refining and bullion trading group MKS Pamp, "Gold usually gets thrashed alongside all other risk assets in the knee-jerk reaction, as seen the past few days.
"[But] if winter travel continues to be curbed and consumer anxiety levels remain elevated, Team Stagflation will get louder into Q1 2022....[meaning gold's] price floors will become higher and gold becomes a buy-the-dip asset class."
Having leapt almost 30% inside 2 trading days after its chief medical officer told the BBC that it's working on a specific Omicron vaccine, stock in pharma giant Moderna (Nasdaq: MRNA) edged lower in pre-market trade Tuesday following CEO Bancel's overnight comments.
"Not many people would have predicted such an evolution [of the virus] in one bound," he told CNBC. "It seems to be much more infectious than Delta...[and] also present in more countries" than first guessed.
The efficacy of existing vaccines is "highly likely" to be weaker versus Omicron, Bancel went on.
The UK gold price in Pounds per ounce today held above £1345, but a small rise in the Euro however saw gold for German, French and Italian buyers dip to 3-week lows at €1576 following news of the strongest consumer-price inflation in 3 decades across the 19-nation currency union born in 1999.
Eurozone government bond prices jumped however, joining other Western sovereign debt in driving long-term public borrowing costs down to 2-month lows on US and UK government notes and 3-month lows for Germany.

The Gold/Silver Ratio – sometimes seen as an indicator of economic fear when rising – last traded above 78 two months ago.