END_OF_DOCUMENT_TOKEN_TO_BE_REPLACED

GOLD PRICES popped higher but silver struggled to follow Thursday lunchtime in London after new US data said the world's largest economy grew a little faster than previously estimated at the end of 2020 but only thanks to a slowdown in price inflation.
Gold erased all but $5 of this week's earlier $20 drop, rallying to $1740 per ounce.
Silver prices rose to $25 per ounce after touching the lowest in more than 2 months at $24.67, down 17.7% from start-February's sudden Reddit Ramp spike to the highest since 2013.
That pushed the Gold/Silver Ratio of the 2 formerly monetary metals relative prices back above 69, the highest valuation for 'safe haven' gold over more industrially-useful silver the end of January. 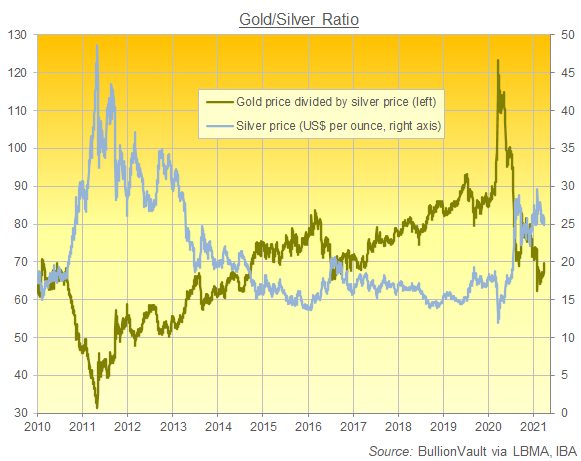 Jobless benefit claims in the US today came in below analyst forecasts for the latest weekly data, but the recent average for new claims would still mark a series record if not for the huge spike of March to April last year.
Across 2020 as a whole, and amid the Covid pandemic, US economic output shrank by 2.3% before adjusting for inflation, the steepest such contraction since the "recession within a depression" of 1938.
The price index for gross domestic purchases meantime increased by 1.2%, slowing from the 1.6% inflation of 2019 according to the Bureau of Economic Analysis' third estimate.
Government bond prices rose further following that update, extending the last week's retreat in longer-term borrowing costs but keeping 10-year US Treasury yields near 1.60% per annum – their highest since last February, eve of the Covid Crisis, when reached a fortnight ago.
The Dollar meantime rose on the FX market, reaching its highest since November on its trade-weighted currency index, up 3.6% from January's 2-year low.
Crude oil prices slid yet again, down over 3% on Nymex futures, despite the continued blockage of vital global shipping lane the Suez Canal by a grounded container vessel.
"With the capitulation in oil, Dollar strength and yields remaining high, the metals appear to have their work cut out over the coming sessions," says a trading note from Swiss refining and finance group MKS Pamp.
Platinum prices rallied with silver but also lagged gold on Thursday, halving this week's plunge from $1200 to $1145 per ounce, the lowest in 2 weeks.
Geopolitical tensions continued to rise in East Asia meantime, as the Philippines sent navy vessels on what it called "sovereignty patrols" in the South China Sea, where a Chinese militia fleet of 200 boats has surrounded the Whitsun Reef (also known as the Julian Felipe Reef), claimed by Beijing as part of its territory.
" Those ships are not fishing," said Philippines' Defense Secretary Delfin Lorenzana, rejecting Beijing's explanation for the Chinese fleet.
"Why are they lashed together?"
Taiwan meantime said it has begun mass production of long-range missiles, while its ally the USA is reported to be "putting pressure" on Japan to side with the democratic island nation in the face of China's continued demands for re-unification.
US financial regulator the SEC said Wednesday that it is now implementing a law, passed at the end of Donald Trump's presidency, which could expel Chinese companies from the New York stock market if they don't share audits of their non-US activities.
New York equities opened lower on Thursday, following Asian and European stock markets down.