END_OF_DOCUMENT_TOKEN_TO_BE_REPLACED

GOLD PRICES bounced again in London trade Wednesday after trying and failing to hold $1800 per ounce the third time in 2 weeks despite inflation forecasts in the US bond market hitting their highest in over 15 years as a raft of data disappointed very stretched analyst forecasts.
Silver prices also rallied as gold rose to $1795, regaining the $24-per-ounce level.
Global stock markets in contrast edged back after very nearly matching last month's all-time record high, while government bond prices rose – pushing longer-term interest rates lower again from their recent multi-month and multi-year highs.
Yields on conventional 10-year US Treasury debt edged down below 1.60% for the first time in almost a fortnight, while the yield on 10-year inflation-protected TIPS bonds sank to minus 1.10%, the lowest since early-August's all-time record lows.
Together, that held 10-year breakevens – the inflation outlook implied by bond-market pricing – up at 2.69% per annum, the highest such 'forecast' since 12 May 2006.
That day saw gold prices surge peak at $725 per ounce, up more than 70% from 12 months earlier at the highest since gold's then all-time highs above $800 in January 1980.
Mid-May 2006's peak would then prove gold's highest price until the global financial crisis hit the UK's Northern Rock mortgage lender with a creditor and depositer run in September 2007. 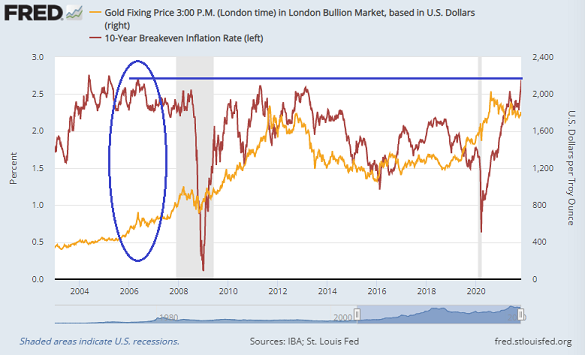 "[There's an] onslaught of questions around gold's relative underperformance in the face of rising inflation metrics and expectations," says strategist Nicky Shiels at Swiss refining and finance group MKS Pamp.
"[Gold] hasn't been the best inflation hedge, yet...[but it's a] traditional inflation hedge that shows up over time."
Meantime, the "disconnect" between gold prices and rising inflation expectations "is growing" Shiels says.
"Inflation has not been this high with US monetary policy this loose, ever...[but] gold continues to be technically compressed." 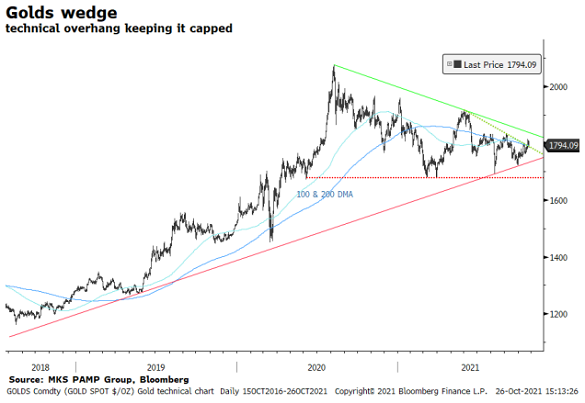 Also looking at the gold price charts, "We noted last week that gold was coming close to completing a triangle formation, which would point to a break-out," says Rhona O'Connell at brokers StoneX.
"That happened last Thursday...with gold breaking higher and running up towards $1820 before correcting.  The uptrend line that formed part of the apex of that triangle should now provide support."
Back in today's action, global stock markets fell from near-record highs, with China's CSI300 losing 1.3% and Hong Kong's Hang Seng off 1.6% as new spread of another heavily-indebted real estate developer missing repayments.
The MSCI World Index closed Tuesday less than 0.1% below 6 September's all-time high, almost recovering the 5.6% drop which followed.
"Chinese borrowers have defaulted on about $9 billion of offshore bonds this year," reports Bloomberg, "with the real estate industry accounting for one-third of that amount."
Commodity prices fell hard Wednesday, knocking US crude oil 1.5% below Monday's new 7-year highs.
Australia's consumer price index rose 3.0% per year in July-September, just below expectations, while Germany's import-price index rose 17.7% per year in September, below the 18.0% predicted by consensus forecasts.
Total bank lending to the private sector across the 19-nation Eurozone was also weaker than predicted, slowing to 4.1% annual growth in September from August's 4.2% pace.
With corporate earnings season underway for European as well as US-listed equities, Germany's Deutsche Bank today missed Q3 forecasts, but shares in Spain's Banco Santander also fell despite beating analyst predictions.
Drinks giant Heineken reported a slowdown in beer sales, and chemicals producer BASF said global supply-chain bottlenecks are hampering its ability to exploit markedly higher prices.